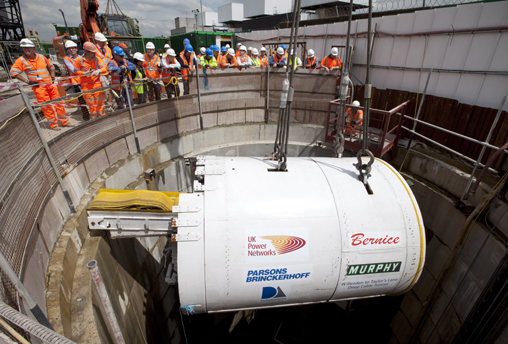 Darren Ramsay, Murphy Tunnelling, Civils & Power Managing Director, said: “This is a major milestone for our tunnelling team. The tunnel has been delivered safely, on time and budget in close collaboration with UK Power Networks.”

The completed tunnel saw the TBM, Bernice excavating through London clay at a depth of approx. 28m deep prior to arriving into a 7.5m reception shaft that had been previously constructed within the National Grid Sub Station, Acton Lane. The tunnel passed underneath eleven Network Rail lines with the drive averaging 16m for every 10 hour shift. She navigated several challenging 70m radius bends along the route, requiring sections of the TBM belts to be shortened to manoeuvre around the tunnel curves.

Murphy’s Tunnelling Division has just achieved two million man-hours worked over five and a half years without a RIDDOR reportable injury, which is underpinned by its Safety & Culture Change Programme and its employees’ commitment to health & safety.