Sydney Metro’s new 15.5km of 6m i.d. twin railway tunnels between Chatswood and Marrickville are now 70 per cent complete as tunnelling reaches the heart of the city deep under Martin Place. 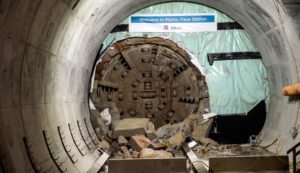 TBM Nancy, one of five Herrenknecht machines being used by tunnelling contractor, John Holland/CPB/Ghella on the project, has arrived at the new Martin Place Station, 28m under Sydney.

After just 11 months of tunnelling, 22km of Sydney Metro’s tunnels are now finished.

Since launching in October 2018, TBM Nancy has tunnelled 6.8km via the new metro stations at Waterloo, Central and Pitt Street.

TBM Nancy will spend a few weeks undergoing maintenance before being re-launched to complete the last 1.3km section between Martin Place and Barangaroo.

It has taken about 21 months to build the caverns for the new Martin Place Station ahead of TBM Nancy’s arrival, removing about 198,000 tonnes of rock – enough to fill about 30 Olympic swimming pools.

Currently two TBMs are delivering the 6.2km from Chatswood to the edge of Sydney Harbour, whilst two are travelling 8.1km from Marrickville to Barangaroo. The fifth TBM is boring twin 1km long tunnels under Sydney Harbour.

The schedule sees the tunnelling contract conclude in 2021.

John Holland/CPB/Ghella was awarded the $2.81bn contract in June 2017.