Contractor HCC/VLCC JV is gearing up to commence tunnelling on Phase 4 DC-06 of Line-8 – Magenta Line on the Delhi Metro in India, following the delivery of a refurbished 6.52m diameter Terratec EPBM.

After a successful Site Acceptance Test, the JV began work to install the first tunnel ring segment for constructing a 2.03km underground extension of the Delhi Metro’s 38.235km Magenta Line from the Vikaspuri Park Shaft to Vikaspuri Ramp near Keshopur. As part of this tunnelling drive, two tunnels (for up and down movement) with a length of 1400m will be bored between Vikaspuri and Krishna Park Extension.

The Contractor selected a Terratec Ø6.52m EPBM with a traditional soil configuration, equipped with a Spoke-Type Cutter Head with a 57% opening ratio which has been proven to be very efficient to excavate this type of soil in previous DMRC Phases. This refurbished machine has previously completed tunnels for Delhi Metro project CC-34 and Lucknow Metro project LKCC-06.

The Cutterhead has been designed to allow the cutting tools to be exchangeable for 17’’ roller disc cutters, making the TBM to be able to bore through the D-walls and cope with the presence of any unexpected obstacle on its way, such as old wells or foundations. The geology is composed of silty sand, fine sand & sandy silt and clayey silt.

The segment lining will be made of RC segments with an outer diameter of 6,350mm, inner diameter of 5,800mm and width of 1,400mm. The total distance that the TBM will bore to is approximately 2,030m.

The tunnel will be excavated at an average depth of 14-16m. As the drives progress, the machines will install reinforced concrete Universal-style, pre-cast lining rings – comprising five segments + key. This section includes a 365m long ramp and approximately 220m long station, hence roughly 2100 segments will be installed.

In January 2020, DMRC had awarded a contract to the consortium of HCC-VCCL for building the construction of twin tunnels from the Vikaspuri Park Shaft to Vikaspuri Ramp, with one underground station at Krishna Park Extension under contract package DC-06 of Delhi Metro Phase 4. The work is expected to be completed in 36 months. 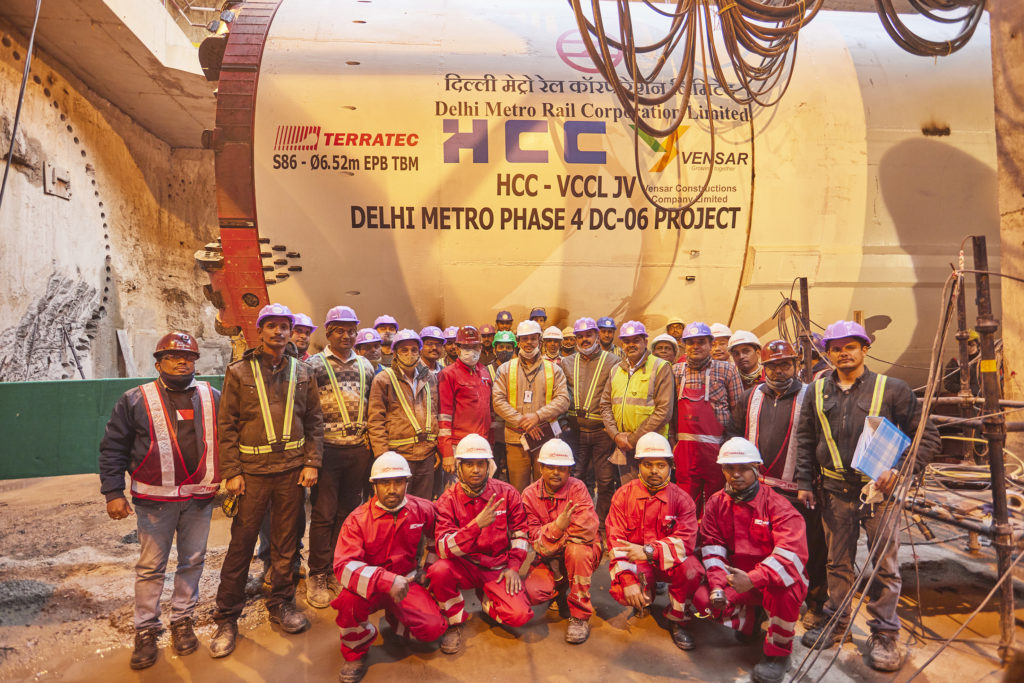