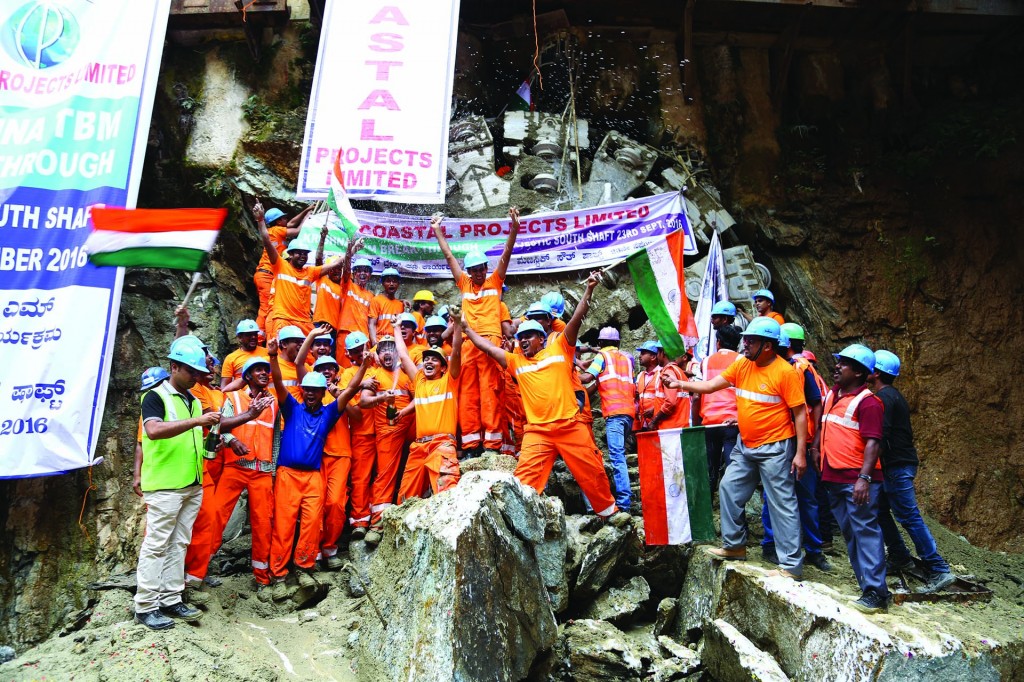 On September 28, 2016, Bangalore’s last TBM for the city’s metro rail project broke through, marking the end of TBM tunnelling on the Namma Metro phase 1.

The Robbins-operated machine, known as “Krishna”, bored a 750m drive through challenging conditions between Chickpet and Majestic stations.  Cleanup and final commissioning of the tunnel will be completed in 2017, and is the last obstacle before owner Bangalore Metro Rail Corporation Ltd. (BMRCL) can open the Malleswaram-Majestic link. The TBM’s sister machine, “Kaveri”, completed a parallel tunnel in June 2016.

The success follows a gauntlet of challenges on the two tunnel sites due to severe delays on the original tunnel drives, which Robbins was not the machine supplier for. After obtaining agreement from the project owner and the contractor, Robbins took over the responsibility for all aspects of the underground operations in February 2015. “We provided a team of over 60 staff including TBM operators, TBM technicians, ring builders, a grouting team, and more. We were also responsible for running surface installations and equipment such as the grout batching plant, gantry cranes and power supply. Contractor Coastal Projects Ltd. (CPL) provided a team of people including surveyors, QC engineers, and loco operators who reported directly to our site management team,” explained Jim Clark, Projects Manager for Robbins India.

The Robbins crew carried out tunnelling operations while the Chickpet station was being constructed around them to mitigate delays incurred before they took over project operations.

The project’s most difficult challenges included a low overburden and unconsolidated ground along the alignment, and the discovery of several uncharted wells directly on the alignment. Difficult ground frequently prevented proper pressurization during cutting tool replacement, requiring a grout solution to be pumped in to fill voids and left to cure. Initially the curing process took up to 36 hours, but with improved application methods this was reduced to a 12-hour curing time.

Another challenge involved the sensitive building structures along the alignment. Issues with surface vibration, explained Clark, required that cutterhead speed be limited to 1.8 RPM during the day shift and 1.2 RPM during the night shift. Despite the obstacles, the TBMs advanced at rates of up to 50mm/min in highly weathered rock.

“This is an industry first, wherein a TBM manufacturer has utilized their in-house expertise and knowledge to take on this level of responsibility for a project,” said Clark, addressing the magnitude of the successful breakthroughs. “The fact that it was ‘a first’ and we were successful in bringing this high-profile project back on track is a great achievement for The Robbins Company.”

Now that tunnelling is complete, the North and South runs of the Namma metro will be connected–a line that, once in service, will carry an estimated 40,000 passengers daily. It is anticipated that Phase One of the metro will be opened in its entirety in 2017.