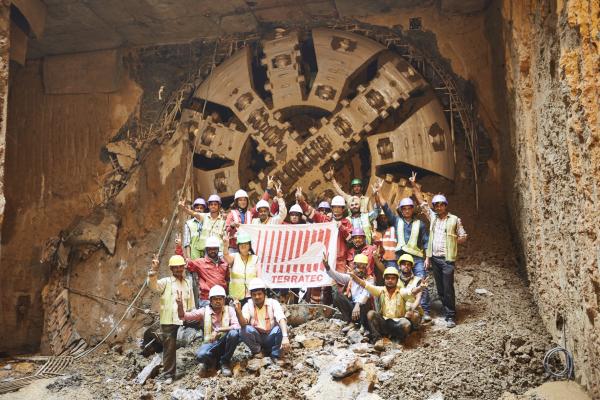 In addition to marking the end of tunnelling works on the Pink Line (Line 7), the final S25 and S28 breakthroughs also signify the successful completion of 20 TERRATEC tunnel drives on Phase III of the Delhi Metro project.

Among its competitors, TERRATEC received the largest number of new machine orders for Phase III, with eight EPB machines working across four separate contracts on the project. In addition to supplying the machines, TERRATEC also provided comprehensive services on site to support the operation and maintenance of the equipment, assisting the contractors in their achievements.

Two 6.61m diameter mixed/rock EPB shields – S23 and S24 – were deployed on Contract CC-07, part of the Violet Line (Line 6) Extension, by a joint venture of Russia’s Metrostroy and local firm ERA Infrastructure. In addition to unexpected amounts of full face – very hard (up to 200MPa) and highly abrasive – quartzite, these machines encountered sections of highly variable mixed faced conditions with numerous large diameter boulders. The TERRATEC TBMs proved themselves up to the challenge however and successfully completed four drives between Jama Masjid and Kashmere Gate Stations.

The final contract, on the Magenta Line (Line 8), was the first to be completed in full. Delivered by a joint venture of Hindustan Construction Company (HCC) and South Korea’s Samsung Engineering and Construction Group, Contract CC-34 forms the most westerly section of the new line between Janakpuri and Palam Station. The Contractor selected TERRATEC to design and manufacture two 6.52m diameter EPB machines with a traditional soil configuration, equipped with a spoke-type cutterhead with a 57% opening ratio.

The geology along the 3.6km alignment composed of very wet silty clay and dry sandy soil. Both TBMs passed underneath residential areas and came in close proximity to a number of sensitive structures, such as the foundation piles of existing elevated metro stations and a highway flyover, requiring very accurate settlement control in critical zones.

The CC-34 contract drives were completed last August, with the second TBM (S36) breaking through at Palam Station a month after its twin (S37). The performance of the machines was recognised at the breakthrough ceremony by Mr. Raman Kapil, Project Director of the joint venture. “We are thankful to all our sub-contractors and equipment suppliers, especially TERRATEC, as these TBMs have excavated very smoothly and this has helped to complete the works ahead the planned schedule.”

With the completion of the last of these drives, the Delhi Metro Rail Corporation (DMRC) is nearing the end of tunnelling on one of the largest urban tunnelling projects ever undertaken. With more than double the amount of tunnelling on both Phase I and Phase II combined, overall a total of 30 TBMs were used to bore the 80 kilometres of underground tunnels on Phase III of the metro.