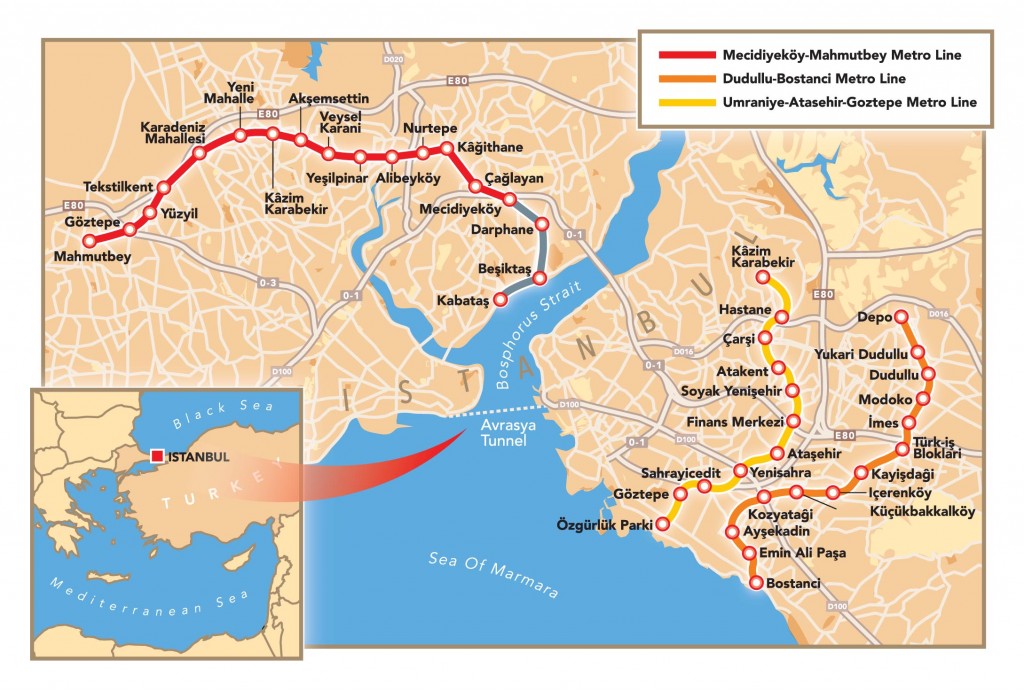 Australian-based TBM manufacturer, TERRATEC, has secured an order to supply four new 6.56m diameter EPBMs for Istanbul’s Ümraniye-Ataşehir-Göztepe Metro Line from the Turkish tunnelling Joint Venture of Gulermak, Nurol & Makyol. This will see a total of seven TERRATEC EPBMs working simultaneously on the Istanbul Metro by the middle of 2018.

The order comes following the reportedly very strong performance of a TERRATEC EPBM delivered two years ago to the Mahmutbey-Mecidiyekoy Metro Line, which is being built by the Gulermak, Kolin & Kalyon Joint Venture; and the current progress of two other 6.56m diameter EPBMs that were purchased last year by the Şenbay Madencilik-Kolin-Kalyon Joint Venture for the Dudullu-Bostancı Metro Line project (see map).

The TERRATEC TBMs have versatile mixed-face cutterheads with an opening ratio of about 35% that have proven to work extremely effectively in Istanbul’s mixed geology – which includes low-strength sandstones, siltstones, limestones and shales – as well as other state-of-the-art features such as VFD electric cutterhead drives, soft ground cutting tools that are interchangeable with 17’’ roller disc cutters, high torque screw conveyors and active articulation systems.

“We have chosen TERRATEC because we view them as a solution provider for the project not just an equipment supplier,” says Ufuk Yapıcı, Project Manager for Gülermak-Nurol-Makyol JV. “We are expecting great things and are confident that TERRATEC will deliver.”

The new TBMs will be used by the Gulermak, Nurol & Makyol JV on the €600M Ümraniye-Ataşehir-Göztepe Metro contract, which was awarded in April 2017. The 13km-long line, along with 11 new stations and NATM-built connections, will form a second north to south rail corridor under the densely-populated Anatolian side of the city and will be located entirely underground at an average depth of about 30m. The TBMs are currently in production and will begin Factory Testing in the final weeks of 2017.

The Ümraniye-Ataşehir-Göztepe project is one of five new metro lines currently being built by the Istanbul Metropolitan Municipality. Due for completion in 2019, the new lines will increase the city’s current 145km Metro network to more than 480km.

In recent years, TERRATEC’s order book has demonstrated significant growth around the world. Machine performance and client satisfaction have provided the foundations of a loyal customer base and are making the Australian manufacturer the first choice for more and more contractors.

Earlier this year, TERRATEC opened a new large-diameter TBM facility that will deliver more than 12 new machines in the second half of 2017 and beginning of 2018, including the four new EPBMs for Istanbul.