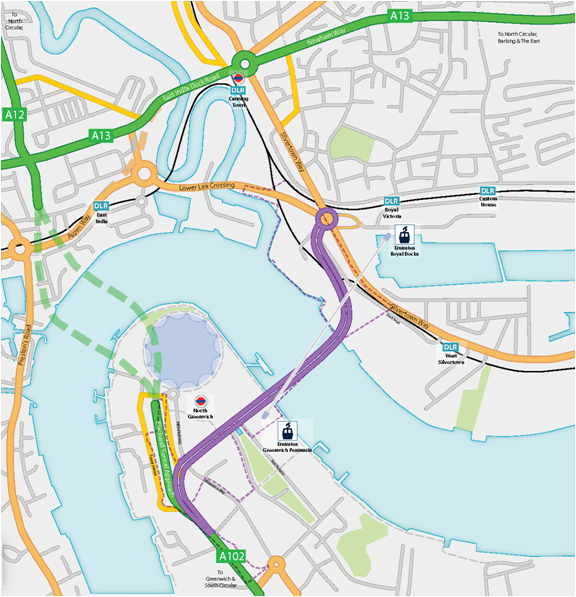 Transport for London’s recently released river crossings consultation report shows there is continued overwhelming support for a new road tunnel between Silvertown and the Greenwich Peninsula in East London, and a new river crossing at Gallions Reach.

In October 2012 TfL launched the second phase of a public consultation on a proposed package of new river crossings between east and south east London – this closed on 1 February 2013 and the findings are now available in report. In total over 10,000 responses were received from the two consultations.

More than 90 per cent of people from the initial consultation agreed there is a need for more river crossings in east and south east London.

The findings in the report show there is a high level of support for the option of a new road tunnel, between Silvertown and the Greenwich Peninsula, with 76 per cent of respondents supporting it.

A third of those that took part support user charging as a way to fund river crossings.

TfL is now considering the findings in the report. If a decision is taken to progress any of the proposed options further, more detailed consultations would take place.

TfL’s Managing Director of Planning, Michele Dix said: “We have delivered very significant public transport improvements providing better connections across the Thames in south and south east London, however with London’s population potentially reaching 10 million by 2031, we recognise the importance that will be placed on transporting goods and services throughout east and south east London.

“The proposed additional road infrastructure is vital. Apart from the opening of the QEII Bridge at Dartford there has been no increase in the capacity of the highway network across the river in east London for nearly 50 years.

‘We will review the river crossings consultation report findings to decide what the next steps will be. There will be further more detailed consultations if any of the proposals are taken forward.”

The crossings in the area are under significant strain, with delays at the Blackwall Tunnel averaging 20 minutes per vehicle during the morning peak.

Currently there are only a few routes for vehicles to choose from and some of those create indirect journeys across the river costing businesses money and time and discouraging investment.

Height restrictions at the Blackwall Tunnel further reduce the options available to vehicles.

Both the Blackwall Tunnel and Woolwich Ferry are operating under considerable stress and the new river crossings proposed would address these problems.

The report is available online at tfl.gov.uk/rivercrossings