Following submissions from organisations to undertake the design and build of the UK’s A303 Stonehenge project, Highways England has selected three international Joint Ventures for the next stage of the procurement process.

From next month, the three Joint Ventures will be invited to participate in dialogue with Highways England over a six-month period before submitting their final tenders. The preferred bidder is expected to be announced in 2021. 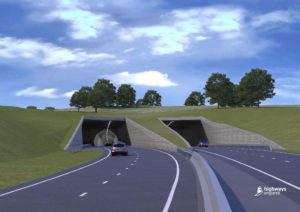 Highways England Project Director Derek Parody said: “We’re looking forward to entering into a competitive procurement process with some of the world’s most highly regarded construction companies, subject of course to planning consent being granted.

“They are all of the highest calibre, with a proven history of delivering complex infrastructure projects, and they are keen to be part of delivering this transformational project.

The A303 Amesbury to Berwick Down scheme past Stonehenge forms part of a programme of improvements to upgrade the A303/A358 corridor, a vital connection link between the South West and London and the South East.

Highways England’s proposed £1.7bn upgrade of the A303 between Amesbury and Berwick Down includes:

The scheme will not only unlock congestion along this vital A303 route, conserve and enhance the Outstanding Universal Value of the World Heritage Site but also benefit the local and regional economy by providing skills and job opportunities for businesses large and small.

Following the six-month Development Consent Order Examination last year, the Planning Inspectorate has now sent its report and recommendation to the Secretary of State for Transport and a decision is expected in due course.

Mr Parody said: “We are awaiting the Secretary of State’s decision on our Development Consent Order application and in the meantime, we’re ensuring that the bidders are fully informed on all aspects of the procurement process.”