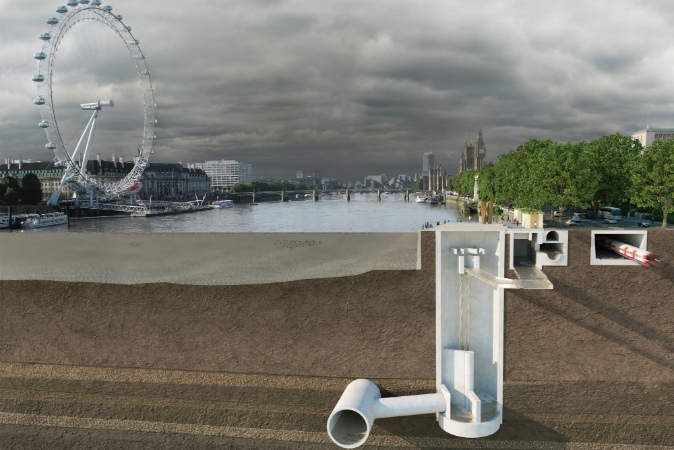 Construction of London’s new £4.2bn ‘super sewer’ will start next year following the confirmation of independent investors to finance and deliver the scheme. Earlier today, Bazalgette Tunnel Limited received its licence from Ofwat as a new regulated utilities business, separate from Thames Water.

At the same time, Thames Water announced a much lower than predicted cost of the project to customers. The company’s current average household bill for water and wastewater of around £370 per year is now expected to remain at that level, before inflation, until at least 2020.

Environmental groups and river users joined Ministers and business leaders in celebrating the news – recognising that the Thames Tideway Tunnel is needed urgently to tackle the issue of discharges of untreated sewage into the river and ensure the capital’s sewerage system is fit for the 21st century, as well as creating thousands of jobs and helping to boost the economy.

Martin Baggs, CEO of Thames Water, said: “It’s no exaggeration to say this is a truly momentous day for London and the River Thames. I want to thank everyone who has played a part in getting us this far.

“It’s a historic achievement and I look forward to supporting Bazalgette Tunnel Limited in ensuring the project is delivered safely, on time and to budget. The strong competition for both construction and financing has driven down costs for our more than five million bill payers.

“Our current annual bills already include £7 for the tunnel and this will eventually rise to a total of £20 to £25, before inflation. This is sharply down from the original maximum estimate of £70 to £80 set four years ago. The really good news is that cheaper finance and other efficiencies mean that this hugely important piece of national infrastructure can be built while keeping our bills at or around their current level, before inflation, for at least the next five years.”

Environment Secretary Elizabeth Truss said: “The Thames Tideway Tunnel will be a fantastic example of world leading British engineering at its best. It will also boost economic growth across the capital, generate more than 9,000 jobs and bring huge benefits to the natural environment by protecting the Thames from sewage.

“Today’s announcement brings us one step closer to finally modernising London’s ageing sewerage system. In the 21st century, the most dynamic city in the world should not have a river that is polluted by sewage every time there is heavy rainfall.”

Andy Mitchell, CEO at ‘Tideway’, the delivery organisation for the Thames Tideway Tunnel, now owned by Bazalgette Tunnel Limited, added: “Our task over the next seven years is quite simply to make sure London has a sewerage system capable of meeting the capital’s modern-day needs. Everyone in the team is excited and can’t wait to get started.

“It’s not just about cleaning up the river, important though that is. Nor is it just about building a tunnel. It’s about making sure we transform the River Thames, making it central to the capital’s wider social and economic well-being. This is a once in a generation opportunity and we are determined to raise the bar in every way, not least the way we treat local communities potentially most directly affected by construction works.

“Through our commitment to remove excavated materials by barge, the opportunity to rejuvenate the river as a transport artery will be a particular focus for us.”

The Thames Tideway Tunnel will stem the flows from the 34 ‘combined sewer overflows’ (CSOs) identified by the Environment Agency as the most polluting. The £4.2 billion project will connect up with the Lee Tunnel. This has already been constructed by Thames Water to take wastewater otherwise destined for the river to Beckton sewage works, East London, from early in 2016.

Along with Thames Water’s recent expansion of the five sewage treatment works on the tidal Thames, the two tunnels will greatly reduce the 39 million tonnes of untreated sewage that currently overflow into the tidal River Thames via CSOs in a typical year.

Bazalgette Tunnel Limited is backed by pension funds and other long-term investors represented by Allianz, Amber Infrastructure Group, Dalmore Capital Limited and DIF. The investor group includes a significant proportion of UK pension funds through which over 1.7 million UK pensioners will have an indirect investment in Tideway. The Consortium’s backing fulfills a key component of the HM Treasury’s National Infrastructure Plan, designed to finance the development of UK infrastructure with the support of highly experienced private investors.

The consortium takes its name from Sir Joseph Bazalgette, the pioneering Victorian engineer, who more than 150 years ago transformed the capital, constructing the interceptor sewers to keep sewage out of the River Thames. Still in excellent condition, these remain the backbone of the capital’s sewerage network, but now lack the capacity to cope with the city’s rapidly growing population.

With planning approvals for the 25-kilometre (15-mile) tunnel already secured, the newly-created company can now award the construction contracts for the project. The winning contractors for the three tunnel sections were selected through a separate and highly competitive tender process run by Thames Water:

The System Integration contract has been awarded to infrastructure support service provider, Amey, which will be responsible for providing process control, communication equipment and software systems for operation, maintenance and reporting across the Thames Tideway Tunnel system.

They will now mobilise their teams to start the work, which is due to take seven years to complete.