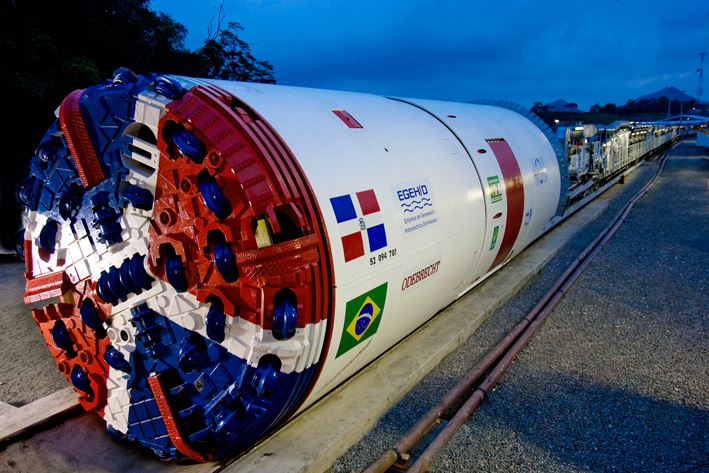 Following a year of TBM tunnelling, and despite the forces of Mother Nature, Odebrecht Construcción y Ingeniería is making great progress on its 4.6m diameter Herrenknecht hard rock Double Shield drive for the main portion of a 13.5km headrace tunnel for the Palomino Hydroelectric Project, in the Dominican Republic.

When Tunnelling Journal visited the project last month, exactly one year after the launch of the Herrenknecht supplied and operated machine last August, 8.6km of the 12.5km long TBM drive had already been completed, bringing the overall excavation progress of the project’s 18.5km of tunnels to 65%.

Client Empresa de Generación Hidroelectrica Dominicana (EGEHID) awarded a US$364M contract for the 80MW scheme, located near San Juan – just 60km from the border of Haiti – to Odebrecht in May 2005. In addition to the headrace, other major elements of the project include a 60m high x 145.4m wide RRC dam, a 16m wide x 45.5m long x 29.6m underground powerhouse, a 2km long tailrace tunnel, and numerous access adits and shaft structures.

Brazilian firm Intertechne Consultores is undertaking the overall design of the project, with Arup and Vigl Consult undertaking the precast segmental lining design for the TBM tunnel. Herrenknecht, in combination with its subsidiaries, has a subcontract to supply, operate and service all equipment relating to the TBM drive.

Drill and blast tunnel excavation for the project first began in June 2008 using two Sandvik Axera twin-boom jumbos, and remains ongoing, with the TBM arriving on site in May last year.

Following its launch from a drill and blast starter tunnel – and despite some expected sections of challenging weak rock and an area of high water inflows – the 300m long, 615 ton, UTS operated machine has consistently averaged good rates of advance; with a best day of 52m, a best week of 282m and a best month of 1092m. Cutter wear has also been extremely favourable so far, with disc consumption 42% less than predicted, through the project’s sedimentary Ventura and volcanic Tireo rock formations.

The highland region where the scheme is located – which although susceptible to exceptional lightening storms that have posed a challenge to electricity supplies on the project ¬– was thankfully relatively untouched by the massive 7.0-magnitude earthquake that hit Haiti this January. Although some very minor damage was caused to the site offices and accommodation buildings, the underground works were almost completely unaffected.

To find out more about the design and construction of the Palomino Hydroelectric Scheme, see next month’s edition of North American Tunnelling Journal for a full-length feature on the project.