Home > Toronto to build an additional 30km of transit tunnels

Toronto to build an additional 30km of transit tunnels

The province, via its transit agency Metrolinx, will now invest $8.4 billion to build the 25km (15.5-mile) Eglinton Crosstown LRT line from Black Creek Drive to Kennedy entirely underground. Previously, only the central 10.5km (6.5-mile) portion of the Eglinton line (from Black Creek Drive to Laird) was due to be constructed within twin-bore tunnel; with four 6m (19.7ft) diameter owner-procured EPBMs already on order from Lovat and due to be delivered for a planned construction start in early 2012 (see NATJ Oct/Nov 2010 digital edition). 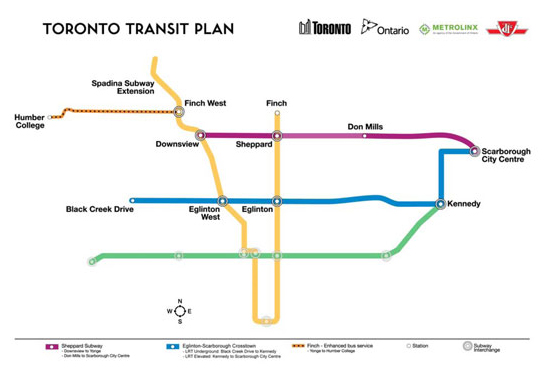 The Eglington Scarborough Crosstown line, as it will now be known, will also replace the city’s existing Scarborough Rapid Transit line, running above ground from Kennedy Station to Scarborough Town Centre. “This is the biggest ever investment in Ontario on public transit. This transit line will be the spine of the Toronto and the regional systems,” said McGuinty. He added provincial investment will also cover the cost of 130 new LRT transit cars for the system.

The City of Toronto’s end of the bargain is a 14km (8.7-mile) expansion of the existing Sheppard Subway line, which will now be extended west to Downsview and east to Scarborough City Centre, at a cost of CA$4.15 billion. Mayor Ford said that the majority of this funding will need to come from the private sector, but stressed that the city would maintain ownership and operation of the line after construction is complete. Ford added that the city will ask the federal government for a previous $330 million commitment made to the Sheppard project and said the province may provide additional funds to cover part of the costs. McGuinty further stated that if the province comes in under its $8.4 billion budget on the Eglington line these savings would also be dedicated to construction of the Sheppard extension.

The casualty in this re-jigged transit plan is a scrapped light rail line for the low-income Finch Avenue West neighbourhood. The Toronto Transit Commission (TTC) will instead run an “enhanced” bus service along the route until a further new subway line can be built. Ford promised that this would be within the next ten years.

Construction of the Eglinton line and the Sheppard subway extension are both planned for completion by 2020.

In addition to the above, site mobilisation is now in full swing for TTC’s 8.6km (5.3-mile) long Toronto-York Spadina Subway Extension (TYSSE), which features 6.7km (4.1-miles) of EPB bored tunnels and six state-of-the-art stations. The CA$2.63 billion project, which is being funded by the Government of Ontario, the City of Toronto and York Region, is due for completion in 2015 (see ‘Aecon awarded $279M Spadina Southern Tunnels contract in Toronto‘ and ‘OHL is apparent low bid for Spadina north‘).