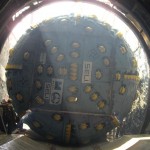 Currently final preparations are underway on-site with the testing and commissioning of the TBM, and it’s connection to the 6 back up gantries.

The launch site is extremely tight and to help necessitate TBM launch the opening 10m long section of the tunnel has already been constructed by Maeda using excavators and rock splitting techniques. Seventeen inverts have been placed and the TBM has been transported down the 10m long starter tunnel, and will soon be ready to turn its cutterhead into the face.

The tunnel will run at depths of 10m – 40m through strong and abrasive rock, including Tuff of up to 400MPa, and Granodiorite reaching 300MPA, and will be lined to an i.d. of 6.5m with a 5 pre-cast segmental lining + key.

Seli is hoping for advance rates of around 21m per day, although extensive probe drilling and possibly pre-excavation grouting will be required.

Seli, is both tunnelling sub-contractor and TBM supplier on the project, working in JV with Maeda and CREC on the US$155M scheme that will alleviate flooding in the city’s Tsuen Wan and Kwai Chung districts.

Consultant for the project is Scott Wilson, with Mott MacDonald Hong Kong acting as supervisor for the client, the Drainage Services Department. Breakthrough is scheduled for Mid August 2011.