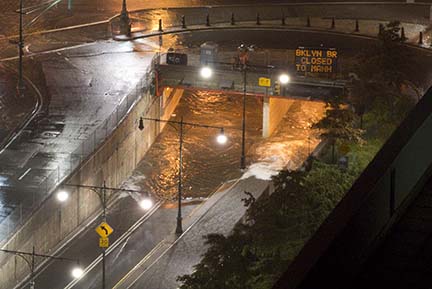 New York’s MTA Bridges and Tunnels announced Monday, November 17, that it plans to award a four-year, $282.5 million contract to Tully Construction Company for repairs and restoration projects related to damages at the Hugh L Carey Tunnel (formerly the Brooklyn Battery Tunnel) caused by Superstorm Sandy.
“We learned just how vital the HLC Tunnel is to the region in 2012 after Superstorm Sandy flooded the tunnel with approximately 60 million gallons of brackish water compromising the life safety systems in the tunnel,” said MTA Bridges and Tunnels President James Ferrara. “This project will increase the level of resiliency against future weather events. This is the largest construction contract in our Agency’s history.”

In addition to Sandy restoration, the contract with Queens-based Tully Construction will also include previously planned capital improvements at the tunnel. The coordinated approach of matching Sandy-related restoration with other necessary work is a more effective way of addressing multiple project needs.

“The public will benefit the most from this optimized approach since it will result in less traffic impact over a shorter duration,” said Deputy Chief Engineer Romolo DeSantis, who oversees MTA Bridges and Tunnels’ post-Sandy recovery and restoration efforts at the Hugh L Carey, and Queens Midtown Tunnels, as well as the Marine Parkway-Gil Hodges Memorial and Cross Bay Veterans Memorial bridges.

The scope of the project includes: 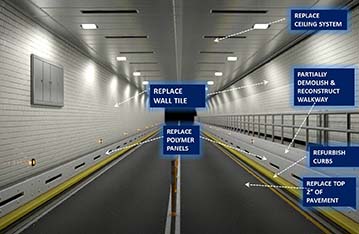 A total of 24 construction firms or joint venture teams received the request for proposal under a resolution adopted by the MTA Board in September 2013 allowing Bridges and Tunnels to pre-qualify prospective bidders based on qualifications including experience and expertise in doing tunnel repairs and financial capabilities based on the complexity of the project. Of those, 14 were deemed eligible and Tully Construction was the low-bidder at $282.5 million.

DeSantis said most of the work will be done during off-peak and nighttime hours.  Single tube closures will be necessary but one tube will remain open at all times, with one lane operating in each direction.

The project is partially funded through a FEMA grant for Sandy-related repairs. MTA entered into an agreement with FEMA in April, which will provide $403 million for repairs to the Hugh L. Carey and Queens-Midtown Tunnels and measures to prevent damage to the tunnels from future flood events. The remaining portion of this project, which consists of previously planned capital work, will be funded from MTA B&T’s Capital Budget.

Work on this contract is expected to be completed within approximately four years.