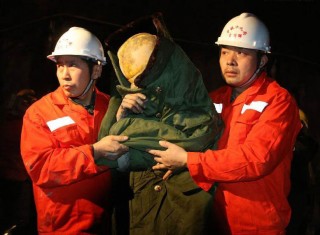 [Updated: Saturday, April 5th] Following an 85-hour ordeal, all of the twelve construction workers trapped by a collapse that occurred during the construction of a tunnel in Hunchun City, in the northeast of China’s Jilin Province, on Wednesday, April 2nd, have been rescued and are currently receiving medical treatment.

The workers were constructing the Xiapanling No. 1 tunnel, a key portion of the 359km Jilin-Hunchun High-Speed Railway line, near the border with North Korea, when the collapse occurred at 2am on Wednesday, April 2nd. Local emergency teams were dispatched, and firefighters and medical teams were sent to the area to render assistance and dig out the twelve workers.

Rescuers made contact with the trapped workers and delivered food to them at 1.55pm on Friday through a passage bored into the collapsed tunnel. Following an 85-hour ordeal, all twelve of the workers had been rescued by 3.30pm local time on Saturday, April 5th.

The Jilin-Hunchun train line is a major development project for Jilin under the 12th Five Year Plan (2011-2015), and is part of three major railway projects aimed at bringing North Korea closer into China’s economic hub in its northeast region.

The entire project cost is 41.6 billion yuan or US$6.71 billion and is expected to be completed and operational before 2014 ends.