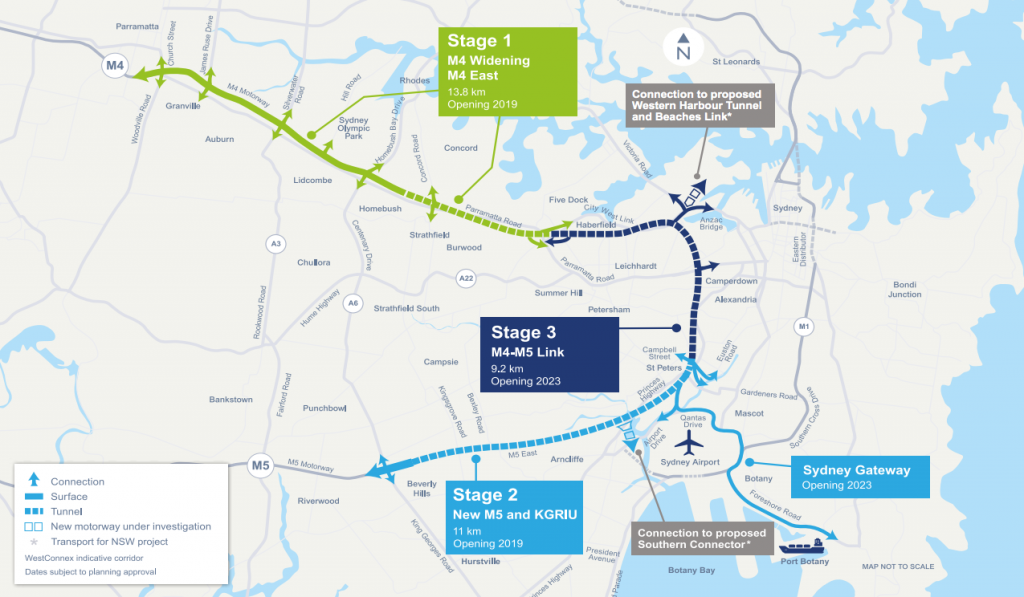 Tunnelling has begun on Sydney’s New M5 road project. Premier Mike Baird and Minister for Roads Duncan Gay witnessed an excavator breaking ground for the 9km twin tunnels, which will run roughly in parallel to the existing M5 East – more than doubling capacity along the busy corridor.

“Anyone who’s used the M5 East knows how critical this link is to fixing traffic congestion in Sydney,” Mr Baird said.

“We now have tunnelling underway on three major motorway links in Sydney with the New M5, M4 East and NorthConnex. Along with our record investments in Sydney Metro rail and light rail, we’re picking up the pace as we rebuild NSW.”

“The M5 is currently congested for 13 hours a day – this new motorway, opening in 2020, will get drivers moving again,” Mr Gay said.

“By moving vehicles underground, we’re able to create more than 18 hectares of new recreational green space, including six hectares at a new Interchange at St Peters.”

Federal Minister for Urban Infrastructure Paul Fletcher said: “The Turnbull Government’s $2bn concessional loan has enabled construction of the New M5 to be fast-tracked. This is a significant day for WestConnex, which will deliver more than $20bn in benefits to the state and create 10,000 jobs during construction.”

Construction of the New M5 alone will generate more than 4,400 full time jobs, including 155 apprentices and trainees.

The CPB Contractors, Dragados and Samsung Joint Venture will build the tunnels using roadheaders through the region’s good-quality Hawkesbury sandstone and Ashfield shale.

Elsewhere on WestConnex, tunnelling on the M4 East is progressing well and a new widened section of the M4 will open to traffic next year.