Tunnelling history made under Sydney Harbour

Tunnelling contractor, John Holland/CPB/Ghella has completed boring the first of two metro railway tunnels up to 40m deep under Sydney Harbour in an historic milestone for public transport in Sydney.

Herrenknecht Mixshield, Kathleen, which is being used to create the twin sub harbour railway tunnels, was launched in June from the new Barangaroo Station site and took almost four months to tunnel nearly one kilometre to the northern side of the harbour at Blues Point. 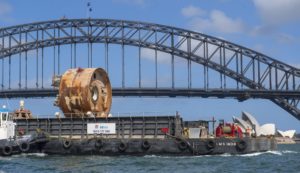 The machine has been disassembled and its giant 90-tonne cutter head and front sections barged back across Sydney Harbour, where it is currently being reassembled to start boring the second tunnel.

The 975 tonne machine removed 87,400 tonnes of sandstone, clay and marine sediments to dig the first tunnel.

Four other Herrenknecht double-shield, hard-rock TBMs are be used on the 31km of 6m i.d. tunnel for Sydney Metro City & Southwest.

TBM Wendy has reached the harbour’s edge at Blues Point, making her the first of the five mega borers to officially finish tunnelling on the Sydney Metro City & Southwest project.

TBM Wendy completed a 6.2km tunnel via new stations at Crows Nest and Victoria Cross and excavated about 563,000 tonnes of sandstone and shale – enough to fill about 87 Olympic swimming pools.

John Holland/CPB/Ghella was awarded the $2.81bn contract in June 2017. The current schedule sees the tunnelling contract conclude in 2021

By 2024, Sydney will have 31 metro stations and a 66km standalone metro railway.