Sydney Metro’s second TBM has broken through into the new Waterloo Station, completing its initial 3.1km drive in six months. Tunnelling contractor, John Holland/CPB/Ghella, which was awarded the $2.81bn contract in June 2017, started boring TBM ‘Mum Shirl’, from Marrickville on 5thNovember 2018 and has since carved through about 304,000 tonnes of rock and installed 1815 concrete rings to form the tunnel between Marrickville and Waterloo. 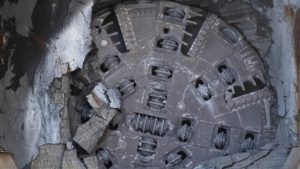 Mum Shirl is one of five Herrenknecht TBMs building the 15.5km, 6m i.d. twin railway tunnels between Chatswood and Marrickville. The TBMs are purpose built, with four double-shield, hard-rock TBMs designed to bore through Sydney’s hard sandstone, whilst a mixed-shield slurry TBM will excavate through the under-Sydney Harbour ground conditions.

Currently two TBMs will deliver the 6.2km from Chatswood to the edge of Sydney Harbour, whilst two will travel 8.1km from Marrickville to Barangaroo. The fifth TBM will bore twin 1km long tunnels under Sydney Harbour.

TBM Mum Shirl will spend about two weeks at Waterloo undergoing planned maintenance before being re-launched through the opposite end of the station box towards Central Station.

The schedule sees the tunnelling contract conclude in 2021.