Tunnelling has officially started on Queensland’s largest infrastructure project – the $5.4bn, 10.2km long Cross River Rail. The Project’s first roadheader, manufactured by local company QMD, has been breaking rock and excavating the first part of the tunnel section of the project’s Roma Street site, where a 280m long, 27m deep station cavern will be constructed. A second roadheader will begin work at Roma Street later this year. 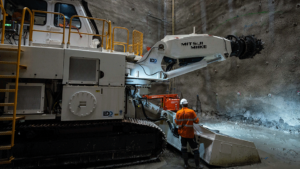 When it’s complete Cross River Rail’s 5.9km of twin tunnels under the Brisbane River and the CBD, and four underground stations at Boggo Road, Woolloongabba, Albert Street and Roma Street will have transformed train travel in the whole of South East Queensland.

The roadheader at Roma Street was assembled in a 12m wide x 16m long x 18m deep access shaft, and it can excavate up to 50 tonnes of rock and soil per hour.

The Roma Street tunnelling site is covered by an ‘acoustic shed’ which stands at 18m high and 60m long, which will minimise noise and contain dust during the 24-hour construction work.

Meanwhile, demolition across the Roma Street site is picking up pace with the old Hotel Jen building disappearing at a rate of one floor a week. Early demolition works have already started on one of Brisbane’s least loved buildings, the Brisbane Transit Centre.

Cross River Rail is being delivered in partnership with the private sector through three major infrastructure packages of work: the Tunnel, Stations and Development (TSD) public-private partnership; the Rail, Integration and Systems (RIS) alliance; and the European Train Control System (ETCS) contract.

Following a comprehensive evaluation process the preferred consortia for these three contracts were announced in April 2019 with the Tunnel, Stations and Development (TSD) public private partnership being awarded to PULSE, a consortium led by CIMIC Group companies, Pacific Partnerships, CPB Contractors, and UGL with international partners DIF, BAM and Ghella.

Major construction works on Cross River Rail are due to be completed in 2024.