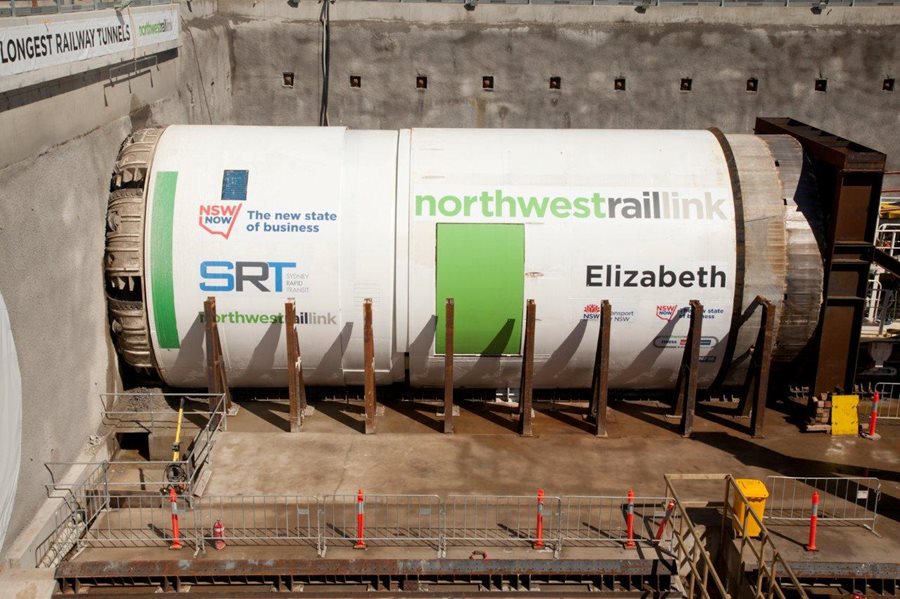 “The NSW Liberals & Nationals came to government promising the first of the four massive North West Rail Link tunnel boring machines would be in the ground before the end of 2014 and we’ve delivered – four months early,” Mr Baird said.

“This is a huge milestone in the delivery of this project – it shows we are getting on with meeting our commitments and delivering the vital infrastructure this state desperately needs.”

Ms Berejiklian said Elizabeth has been assembled at the Bella Vista tunnelling site over the past seven weeks and is 120m long – almost the length of two A380 super-jumbo jets end-to-end.

“The four mega tunnelling machines are supporting 900 new jobs as part of the $1.15 billion tunnelling contract which was awarded in June last year,” she said.

“The North West Rail Link has been a top priority for this Government and I am pleased to announce today that the next two tunnel boring machines are also expected to be in the ground before the end of this year, ahead of schedule.

“The North West Rail Link is due to open in 2019 and is the first stage of Sydney Rapid Transit, the city’s new fully automated rail network.

“I congratulate Project Director Rodd Staples and the tunnel builders, Thiess John Holland Dragados, on reaching this tunnelling milestone so quickly and look forward to seeing the next three TBMs join Elizabeth in building this critical infrastructure project.”

NFM Technologies has supplied the four 6.99m-diameter, hard rock TBMs, for use on the project – the first stage of Sydney’s new rapid transit network.

The 15km twin tunnels will be the longest rail tunnels ever built in Australia. The machines will bore at an average of 27m below ground surface in rock that is mainly formed of extremely abrasive sandstone. The deepest point of the tunnels is 63m.

Boring machines 1 and 2 will work on the 9km section between the new Bella Vista and Cherrybrook stations. The remaining 5km from Cherrybrook to Epping will be bored by machines 3 and 4.