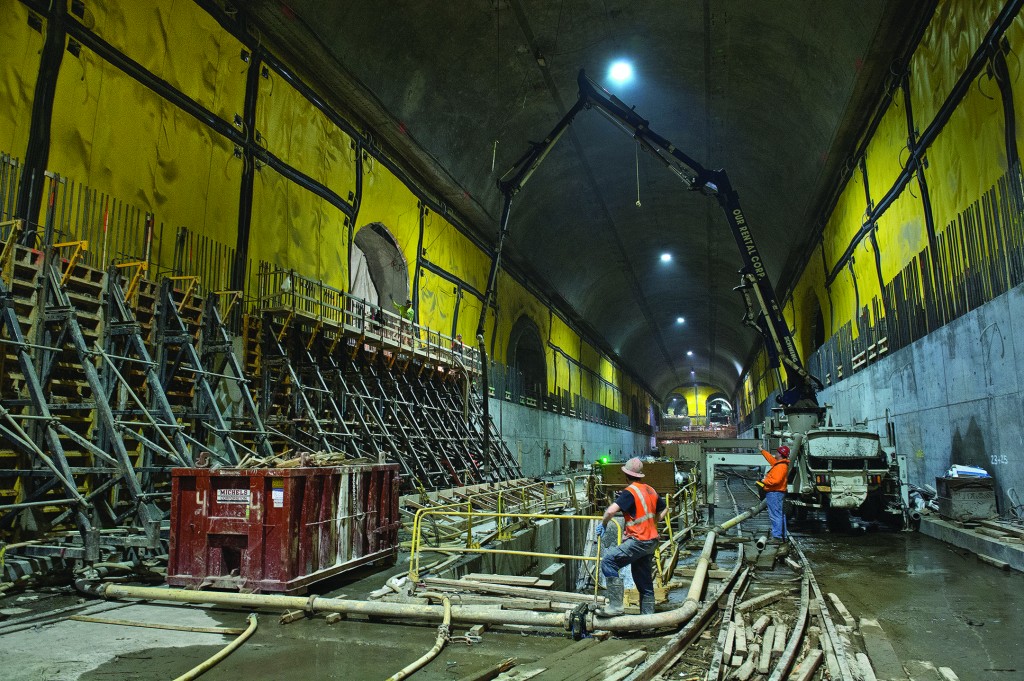 On January 27, the Metropolitan Transportation Authority (MTA) approved the final major contract for the East Side Access project, which will build and finish four platforms and eight tracks for the new Long Island Rail Road (LIRR) terminal some 100ft (30m) below Grand Central Terminal.
Under another contract awarded last month, a tunnel approach will be built and a bridge rebuilt in Sunnyside, Queens. The total value of both contracts is nearly three-quarters of a billion dollars. “These are a significant milestones for East Side Access and will turn raw underground caverns into the modern station that LIRR customers will use when they head directly to and from the East Side of Manhattan,” said MTA Chairman and CEO Thomas F. Prendergast.

The Manhattan contract will transform two enormous 1,143ft (350m) long hard rock caverns into a terminal station, with more than 12 miles of track work from Queens to Manhattan, including eight tracks and four platforms in the station; elevators, escalators and staircases; and all architectural finishes through the caverns.

“With the award of these contracts, the eventual completion of East Side Access is starting to come into view,” said Dr. Michael Horodniceanu, President of MTA Capital Construction. “This is the next chapter in the long history of Grand Central Terminal and the development of New York City.”

The MTA selected the Tutor Perini Corporation for the 3.5-year caverns project at a contract value of $663 million. During the year-long procurement process, 34 firms requested the RFP documents and seven submitted separate technical and cost proposals. The selection committee unanimously selected low cost proposer Tutor Perini from among three firms that submitted best and final offers.

The contract to make upgrades to railroad infrastructure in Sunnyside, Queens, was also awarded to Tutor Perini, in December, and is valued at up to $79 million. The upgrades will enable LIRR trains to access Grand Central Terminal. The work the contractors will perform in Sunnyside includes excavation and construction of an approach structure that will allow the LIRR’s existing tracks to connect to one of the four rail tunnels that have been built below Sunnyside Yard.

This will complete the physical connection that will run from the tunnels under Grand Central all the way to daylight in Sunnyside, Queens. Approaches to the other tunnels will be built separately through other contracts.

Workers will also replace of one of the five bridges that carry tracks over 48th Street.  Additional work that will be performed under this contract includes switch installation; retaining wall construction; installation of electrical utilities; demolition of an electrical substation; and installation of overhead wire support structures.

The contract is structured to take 19 months and is valued at $53.3 million. If the MTA deems that the work is going well, the contract allows the authority to exercise options valued at approximately $26.5 million that would expand the scope of work to be undertaken and extend the duration of the contract to a total of 30 months. Construction activities for this contract are planned to be underway in late February.

The award of these contracts closely follows the completion of two other major contracts, one for a subsurface ventilation structure at 55th Street in Manhattan and one for major civil infrastructure work in Harold Interlocking in Queens. This past November, the project made its first leap forward into the public realm when the contract to fit-out the future LIRR concourse broke through to the Lower Level Dining Concourse in Grand Central Terminal, where escalators and a stairway will be installed to connect to the new concourse.

The East Side Access project will increase the LIRR’s capacity into Manhattan, and dramatically shorten travel time for Long Island and eastern Queens commuters traveling to the east side of Manhattan. It is projected to reduce crowding at Penn Station and nearby subway stations and provide easier access from East Midtown to JFK International Airport via the AirTrain at LIRR’s Jamaica station. East Side Access is scheduled to be completed in December 2022.