The Council’s approval set the project’s scope to include 16 stations; an operations and maintenance facility in Hopkins; a westernmost station at Mitchell Road in Eden Prairie and LRT running in shallow tunnels and freight rail and trails remaining at-grade through the Kenilworth corridor with a budget between $1.673 billion and $1.683 billion. 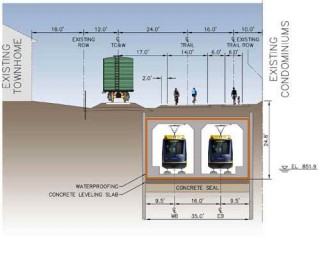 The staff recommendation calls for two one mile long shallow LRT tunnels to be built in the Kenilworth Corridor under the trail, with light rail trains emerging for about 20 seconds between them on a new at-grade LRT bridge over the channel between Cedar Lake and Lake of the Isles.

“The beginning of the municipal consent process signifies the conclusion of two and half years of close work between the Council, Hennepin County and the five cities along the line. The next 75 days will give local policymakers a chance to discuss and debate this regional investment and what it will mean to their community. The Council’s approval today not only moves the Southwest LRT Project forward, it ensures the further expansion of our regional transit system in other corridors,” Council Chair Sue Haigh said.

“In the last year, we have come far to find solutions to numerous technical challenges. I know we can do this together for the good of the region. We must. The Southwest Corridor is projected to add 30,000 additional households and 60,000 additional jobs by 2030. That is more than any other part of the metropolitan area besides the Central Corridor which the Green Line will begin serving this year,” Haigh said.

The Council’s action also directs staff to submit the preliminary design plans to Hennepin County and the cities of Minneapolis, St. Louis Park, Hopkins, Minnetonka and Eden Prairie for their review and approval. The plans will be released on April 10 and made available to the general public online as well as at libraries and city halls along the corridor. Preliminary design can be found online at: SWLRT: Preliminary Route.

The Metropolitan Council and Hennepin County Regional Railroad Authority will hold a joint public hearing on May 12, 2014.  After this hearing, the five cities have 45 days to host their own public hearings and approve or disapprove of the plans.

“We believe the broad benefits of the Southwest LRT, which is a vital regional asset, will help secure consent from all five cities and Hennepin County,” Haigh said. “Failing to achieve municipal consent will do more than kill this project; failing here will set transit expansion in our region back by a decade. That is an unacceptable outcome.”

In the municipal consent process, the Metropolitan Council will be seeking approval from the county and the line’s five host cities on preliminary design plans to build the LRT line in their jurisdictions. Further engineering in 2014 and 2015 will provide greater details, such as station elements and landscaping features.

The preliminary design plans will show the Southwest LRT line with adjustments as approved by the Met Council. Details will include:

The Southwest Light Rail Transit (LRT) Project (Green Line Extension) will operate from downtown Minneapolis through the communities of St. Louis Park, Hopkins, Minnetonka, and Eden Prairie, passing in close proximity to the city of Edina.

The proposed alignment is primarily at-grade and includes 16 new stations and about 15.8-miles of double track. The line will connect major activity centers in the region including downtown Minneapolis, the Opus/Golden Triangle employment area in Minnetonka and Eden Prairie, Methodist Hospital in St. Louis Park, the Eden Prairie Center Mall, and the Minneapolis Chain of Lakes. Ridership in 2030 is projected at 29,660 weekday passengers.

The project will interline with the Green Line (Central Corridor LRT), which will provide a one-seat ride to destinations such as the University of Minnesota, state Capitol and downtown St. Paul.  It will be part of an integrated system of transitways, including connections to the Blue Line, the Northstar Commuter Rail line, a variety of major bus routes along the alignment, and proposed future transitway and rail lines.

The Metropolitan Council will be the grantee of federal funds. The regional government agency is charged with building the line in partnership with the Minnesota Department of Transportation. The Southwest Corridor Management Committee, which includes commissioners from Hennepin County and the mayors of Minneapolis, St. Louis Park, Edina, Hopkins, Minnetonka, and Eden Prairie, provides advice and oversight. Funding is provided by the Federal Transit Administration, Counties Transit Improvement Board (CTIB), state of Minnesota and Hennepin County Regional Railroad Authority (HCRRA).