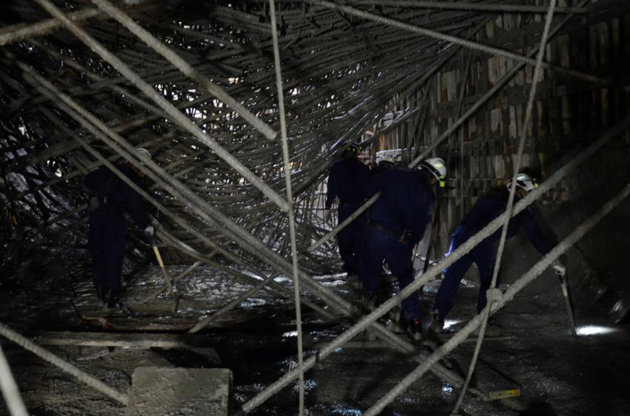 Two workers died today, July 18th, after temporary scaffolding used for the construction of a roof slab at the new Downtown Line (DTL) Bugis Station subway link, in Singapore, gave way. Eight other workers, who were working on top of the structure, were injured and were sent to nearby Raffles Hospital before rescuers arrived.

They had minor injuries and five of them have since been discharged. Of the remaining three workers who were warded, one suffered from abdominal and chest injuries, while another suffered a back injury and the last had a hand injury.

The Ministry of Manpower (MOM) has ordered all construction work to stop, while the Building and Construction Authority (BCA) has revoked the construction permit for the site while investigations are underway.

MOM said that based on preliminary information gathered, workers were casting concrete into the formwork when the structure supporting the formwork collapsed.

The formwork, located between the new and old sections of Bugis MRT Station, was part of the structure being built to form the underground link. The project is being undertaken by a joint venture of Soletanche-Bachy and Koh Brothers.

The Land Transport Authority (LTA) said the incident happened at about 6.50am.

The scaffolding structure was about 4m high, and the area affected – measuring about 5m x 10m – was localised. The entire DTL Bugis station is about 7,500m².

LTA engineers and personnel are at the site to assist SCDF and the police to manage the situation. 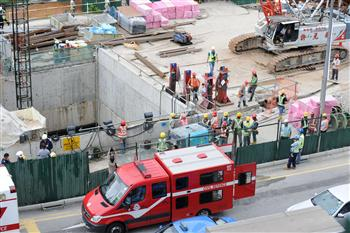 LTA said the DTL Bugis station structure is substantially complete and structurally sound, and that the incident poses no risk to surrounding developments and the public. LTA engineers are checking similar scaffolding structures at all its worksites to ensure they are safe.

The Singapore Civil Defence Force (SCDF) said the first body was found submerged in wet cement and was pressed down by wooden planks in the work area, which is 15m deep. It said the rescue operation was a “race against time” to retrieve the bodies before the wet cement hardened.

SCDF personnel pumped in water to ensure that the cement stayed wet, while cutting through planks and scaffolding to try to reach the second body. About two hours later, the SCDF said the second body had been found. The SCDF stressed that the tunnel is still intact. The area in which the accident occurred is a link connecting the new DTL station and Bugis station, and the existing Bugis station is not affected. Forty SCDF personnel were involved in the search and rescue operation.

BCA said the collapse is localised and there are no structural safety concerns on the surrounding buildings and the road above.