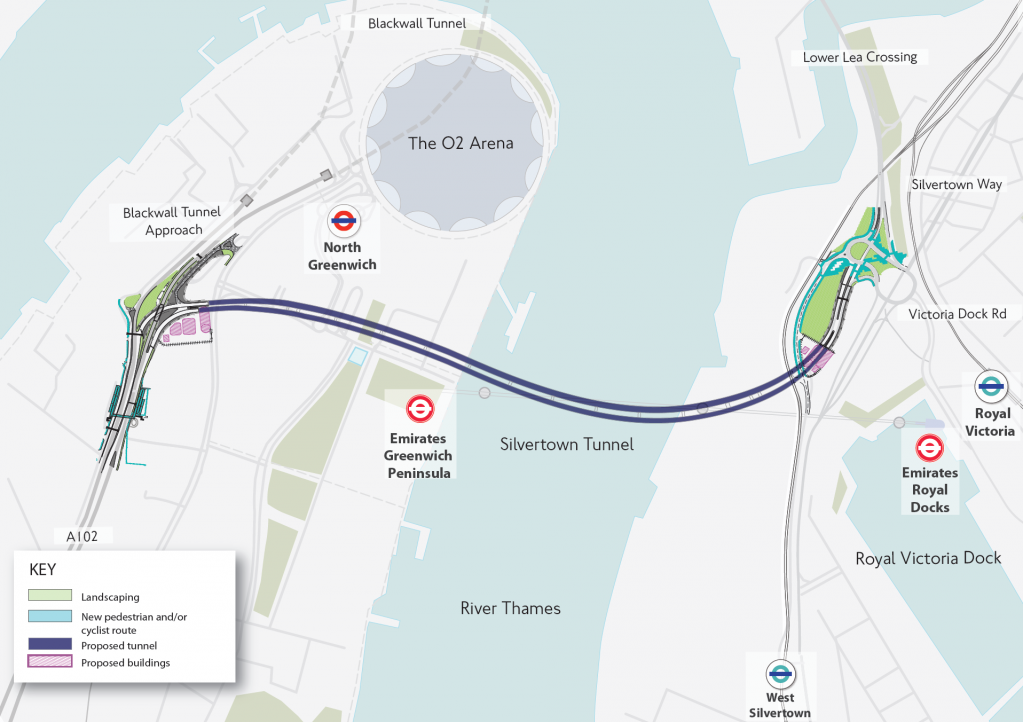 A major public consultation has opened for the Silvertown Tunnel, a vital new river crossing for east London, UK, that would link the Greenwich Peninsula with the Royal Docks.

Silvertown Tunnel would provide much needed relief of congestion at the Blackwall Tunnel, which on an average day experiences two mile tailbacks during peak periods and regularly adds around 25 minutes to journey times. First opened in 1897, it is estimated around one million hours are wasted each year by people queuing to use the Blackwall Tunnel, costing around £10m today in lost time.

Given the expected rise in population, Silvertown Tunnel is estimated to save £1.3bn over 60 years that would otherwise be lost waiting in traffic, as well as helping make local businesses more productive by improving their access to new markets. The crossing would also create hundreds of construction jobs through to its opening in 2022/23. Increased economic activity in east London could lead to more jobs in the rest of the UK, as many firms have clients and supply chains outside of the Capital.

As well as the many economic benefits, Silvertown Tunnel would improve overall air quality on the main approach routes to and from the Blackwall Tunnel. The river crossing would also enable TfL to transform bus connections as double decker buses will be able to use the tunnel. It would connect jobs and homes on both sides of the river, with two new bus routes and four enhanced routes that combined provide a frequency of up to 37 buses per hour in each direction.

The Silvertown Tunnel is part of TfL’s plan to build and support a series of new crossings that are needed to support the Capital’s rapidly growing population, which is expected to grow from 8.6m now to 10m by 2030. Some 600,000 of these people are expected to live in east London alone which is why TfL is progressing plans for three new road based crossings at Silvertown, Gallions Reach and Belvedere as well as exploring the potential for a number of additional public transport connections across the river. For example, TfL is currently working with the charity Sustrans to look at a new pedestrian/cycle link that would help connect the Isle of Dogs with Rotherhithe and Canada Water, relieving pressure on the Jubilee line and Overground, and encouraging greater levels of cycling and walking.

‘Delivering a host of new river crossings to the east is essential for the future success and prosperity of a growing capital city like ours. They have the power to unlock areas for development, creating jobs and new homes, as well as helping to better connect people, businesses and communities. The Silvertown Tunnel is a hugely important piece of new infrastructure that would provide a new link beneath the Thames from two of our city’s great opportunity areas for new homes and jobs – Greenwich Peninsula and the Royal Docks‎.’

‘Silvertown Tunnel would help deliver thousands of new jobs and homes in some of London’s key growth areas. Silvertown Tunnel, which is part of a package of river crossings TfL is developing, is vital to meet the needs of our growing population and would provide much needed relief for the nearby Blackwall Tunnel, which is one of the most congested roads in London where delays are a regular occurrence. I would encourage as many as possible to respond to this major consultation and support the Silvertown Tunnel proposals.’

‘The Mayor is right to support the idea of a new river crossing as we enter the final leg of his mayoralty.

‘A new Silvertown crossing would bring quicker journeys, create jobs and improve travel times for the tens of thousands of new homes planned in east London.’

Local support remains high with a recent TfL business survey showing that two thirds of businesses in east and south London felt that congestion at the Blackwall Tunnel was a constraint or disruptive to their business. This supported the findings of TfL’s most recent public consultation published in March, with over 80 per cent of the respondents agreeing there is a need for the Silvertown Tunnel.

The public consultation runs until 29 November 2015 and will form part of TfL’s submission for a Development Consent Order to the Government for permission to start construction. The construction is expected to begin in 2018 with the new tunnel fully operational by 2022/23.