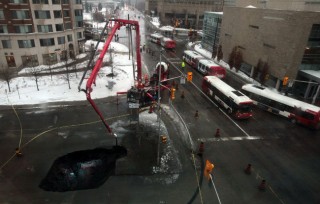 On March 11, Rideau Transit Group (RTG) – the consortium constructing Ottawa’s ‘Confederation Line’ LRT system –  informed the City that the results of its root cause investigation and analysis into a top heading excavation run of ground on February 20th, which caused a sinkhole at the intersection of Waller Street and Laurier Avenue in the early stages of the East Portal heading, have confirmed that the cause of the roadway collapse was due to an unidentified sewer construction pit.

Investigative work to inform RTG’s plan for resuming tunnelling operations within the tunnel continues. The following work has been completed: The reconnection of storm and sanitary sewer infrastructure work is now complete; Additional borehole investigations were completed in the area; and Full access to 50 Laurier has been restored. Further updates will be provided once the City has reviewed RTG’s plan for tunnel commencement at the East Portal.