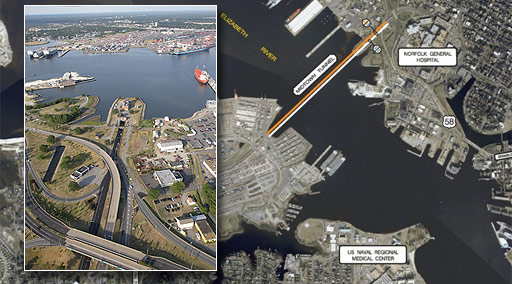 On December 5th, Governor Bob McDonnell announced the Virginia Department of Transportation (VDOT) has signed a comprehensive agreement with Elizabeth River Crossings (ERC) to build a new immersed tube tunnel under the Elizabeth River, running parallel to the existing Midtown Tunnel, as well as rehabilitate the Midtown and Downtown tunnels, and extend the Martin Luther King Freeway.

“Virginia is recognized as a national leader in leveraging limited public dollars to attract significant private-sector investment and innovation, making complex transportation projects possible,” said Governor McDonnell. “By partnering with the private sector, Virginia can advance construction of a second Midtown Tunnel and make other improvements that are critical to the mobility, safety and the economy of the Hampton Roads region.”

The comprehensive agreement has been under negotiation for almost five months between VDOT, ERC and the new Office of Transportation Public-Private Partnerships (OTP3). ERC is a joint venture between Skanska Infrastructure Development and Macquarie Group. The agreement was signed by VDOT Commissioner Greg Whirley under Virginia’s Public-Private Transportation Act. It authorizes construction to begin in 2012, pending financial close early next year. ”

The Midtown Tunnel project has been at the top of the region’s priorities for many years,” said Transportation Secretary Sean T. Connaughton. “The state’s use of a public-private partnership structure will enable VDOT to attract approximately $1.7 billion in private investment to a project that yields tangible long-term benefits to the region and the state.”

Under the comprehensive agreement VDOT will maintain ownership of the infrastructure and will oversee ERC’s activities. ERC will finance, build, operate and maintain the facilities for a 58-year concession period. ERC will also assume risk of delivering the project on a performance-based, fixed-price, fixed-date contract, protecting users and taxpayers from cost overruns and delays.

“Building a new Midtown Tunnel and the MLK Extension will increase capacity and provide for a more systematic flow of traffic, saving the average round-trip user about 30 minutes a day once the project is completed,” said Whirley. “Other benefits include additional evacuation capacity as well as the creation of hundreds of jobs in Hampton Roads.”

Key components of the project include:

“Signing of the comprehensive agreement represents a significant milestone for the project and brings us one step closer to the delivery of these much-needed transportation improvements,” said Christopher Leslie, Chief Executive Officer, Macquarie Infrastructure Partners. “I’m pleased with the strong partnership formed between VDOT and ERC to design and deliver a quality project for the communities of Hampton Roads. We look forward to achieving financial close early in 2012.”