A consortium led by VINCI Construction, together with Spie batignolles, has won a €400M contract on the Metro Line 14 South as part of the Grand Paris Rapid Express transit system. The contract includes 4.6 km of TBM driven tunnel and the construction of the new Kremlin Bicêtre Hôpital station.

Project Program Manager, the RATP has selected the consortium to execute works package GC02 between Olympiades (in the 13th arrondissement of Paris) and Orly Airport. The contract requires the use of an EPBM to excavate the tunnel between Maison Blanche Paris XIII futur station and the TBM start shaft at Jean Prouvé.

The contract is scheduled to last 72 months. 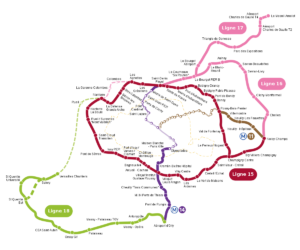 A missing link between central Paris and Orly Airport, Line 14 South will be used by more than 260,000 residents of Paris and the Val de Marne and Essonne départements. It will provide connections with Metro Line 7, Line C of the Paris RER regional express system, Line 7 of the tram system and Lines 15 South and 18 of the Grand Paris Express rapid transit system. It will create a much-needed fast link between Paris and Orly Airport, which is essential for 2024 when the city will host the Olympic Games.
VINCI Construction and Spie batignolles are already working on the extensions of Lines 4, 12, and 14 of the Paris Metro, also managed by the RATP. In addition, VINCI Construction and Spie batignolles, in consortium, have won works packages T3C (€926M) and T2D (€156M) for Line 15 South of the Grand Paris Express programme.