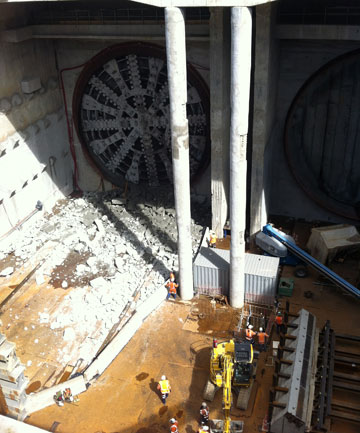 The first of the twin 2.4km long road tunnels on the NZ Transport Agency’s Waterview Connection project has been completed. Alice, the project’s 14.4m diameter Herrenknecht EPBM, broke through on 29th September, at the end of her 10-month journey from Owairaka to Waterview.

The tunnel she has built is the tenth largest diameter tunnel in the world and the longest road tunnel in New Zealand. With a 13.1m i.d. each ring is two metres wide and 50cm thick and comprises 9 pre-cast reinforced concrete segments and a key.

A purpose-built precast factory has been established to manufacture the lining segments by local company Wilson Tunnelling in collaboration with the Well-Connected Alliance.Once opened in early 2017, it will carry three lanes of southbound traffic up to 40 metres below Avondale and Waterview in west Auckland.

The NZ Transport Agency’s Highways Manager for Auckland, Brett Gliddon, says the tunnel’s completion is a significant milestone for the $1.4bn project to build the new 5km, six-lane motorway link from the Great North Road interchange at Waterview to Maioro Street in Mt Roskill and complete the long awaited Western Ring Route

Mr Gliddon says Alice will now be turned around to bore the northbound tunnel.

“While it is not unusual internationally to turn a tunnel boring machine, what is extraordinary about this turn is the sheer size of the machine and the constricted space in which the manoeuvre will take place.”

At 90m long and weighing 3,100 tonnes, Alice is big.  The cutting head and its three trailing gantries will be disconnected and each piece taken one at a time from the completed tunnel and turned.

Only when all of Alice’s parts are in place and reconnected – in early 2015 – will tunnelling resume to construct the second tunnel.

The conveyor system that removes excavated material and other services required for the machine’s operation will also be turned and will follow Alice as she journeys south. By the completion of the second tunnel, they will extend the length of both tunnels – nearly 5km.

A fourth gantry, which operates independently of Alice to install a culvert on the floor of the tunnel, will be the last to be turned.  This culvert will carry the services needed for operation of the tunnels once they have been completed.

The machine’s drive south from Waterview to Owairaka is expected to be completed in about October next year.

Approximately a year of work will then remain to complete the mechanical and electrical fit-out of the tunnels, including completing ventilation buildings at both ends and constructing 16 cross passages to connect the tunnels.

The entire project – which also involves building the surface connections to the existing motorways, 9km of new cycleway, new community amenities such as walkways, playgrounds and skateparks, and planting approximately 150,000 trees and shrubs – is due to be completed in early 2017.

As well as designing and building the Waterview Connection, the alliance will operate and maintain the 5km motorway for 10 years from its completion.