The largest TBM in the Southern Hemisphere has started digging Melbourne’s A$6.7bn West Gate Tunnel Project. The massive 15.6m diameter Herrenknecht TBM, named Bella, was sent on its journey under Melbourne’s western suburbs to build the alternative to the West Gate Bridge. 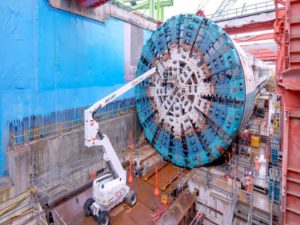 The CPB Contractors and John Holland JV (CPBJH JV) is now driving the machine below Yarraville. It will travel for 18 months, excavating the 4km outbound tunnel that will meet up with the West Gate Freeway in Altona North.

Boring is scheduled to take nearly two years, at a rate of around 9m per day.

The West Gate Tunnel Project will deliver a vital alternative to the West Gate Bridge, providing a much needed second river crossing, quicker and safer journeys, and remove thousands of trucks from residential streets.

The West Gate Freeway is being widened, and will include express lanes between the M80 and the West Gate Bridge, reducing weaving and merging that leads to traffic congestion

The tunnel from the West Gate Freeway to the Maribyrnong River will take cars and trucks underground and off residential streets in the inner west, providing a more efficient freight route and new journey choices for motorists.