FIDIC has expanded the scope of its 2019 agreement with the World Bank which enables the bank to adopt the use of six FIDIC standard contracts until 2024 to now include the FIDIC-ITA Emerald Book form of contract for tunnelling and underground works. 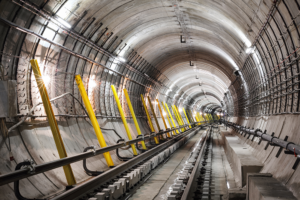 FIDIC has extended the terms of its license agreement with the World Bank dated 6 February 2019 to enable the international funding organisation to now use the Emerald Book contract for all underground works contracts under World Bank-financed projects, for which invitations for bids are published on the bank’s website no later than 31 December 2024.

Both FIDIC and the World Bank have also agreed that the Conditions of Contract for Underground Works (Emerald book) 2019 will be used as part of the bank’s standard bidding documents for projects that are financed by World Bank until 31 December 2024. The bank already has a licence to refer to six major FIDIC contracts for projects they finance and these mainly include the 2017 Second edition FIDIC contracts, which cover a wide range of international construction and infrastructure work.

Commenting on the extension of its agreement with the World Bank to now include the Emerald Book, FIDIC chief executive Dr Nelson Ogunshakin said: “I am delighted that the World Bank has chosen to adopt the use of the Emerald Book and include it in its standard bidding documents. The Emerald Book addresses several critical areas that should lead to the smoother running of contracts in the growing tunnelling and underground works sector and the bank’s move will help to command the respect and authority of the tunnel engineering and construction sector and further underline the fact that both clients and contractors can use this contract with confidence.”

FIDIC hopes that the use of the Emerald Book on World Bank-funded projects will herald a new approach for hydropower projects that involve tunnelling and underground works. Large infrastructure projects, including hydropower and dams, are notorious for cost overruns and delays, especially projects with large underground works where the risks are high. The FIDIC-ITA Emerald Book is based on risk sharing principles and was developed through a joint initiative between FIDIC and the International Tunnelling and Underground Space Association based on many years of experience.