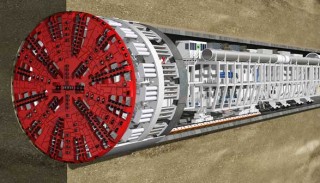 The first half of 2011 will see the largest TBM built to date launched on the 2.5km long twin Sparvo Tunnels, said to be the most challenging section of the A1 Highway Project between Bologna and Florence in Italy. Contractor JV, Vianini Lavori/Toto Costruzioni Generali/Profacta will use a 15.55m diameter Herrenknecht EPBM to bore the tunnels through loose soils with local occurrences of gases on the US$432M Lot 6-7 of the Variante di Valico project for the client Autostrade per l’Italia S.p.A.

Preparations for the assembly of the record-breaking TBM have already started in the Herrenknecht facility in Schwanau. A tight time schedule has been set for the construction of the Sparvo Tunnel and in line with current planning, the machine is expected to start tunnelling near Florence towards the north early next year.

The 7.5km long Lot 6-7 is the last section of the Variante di Valico project, which also includes the construction of the 3km long Val di Sambro tunnel, and will reduce travel times considerably between Bologna and Florence for up to 90,000 vehicles per day after the route is opened at the end of 2013.