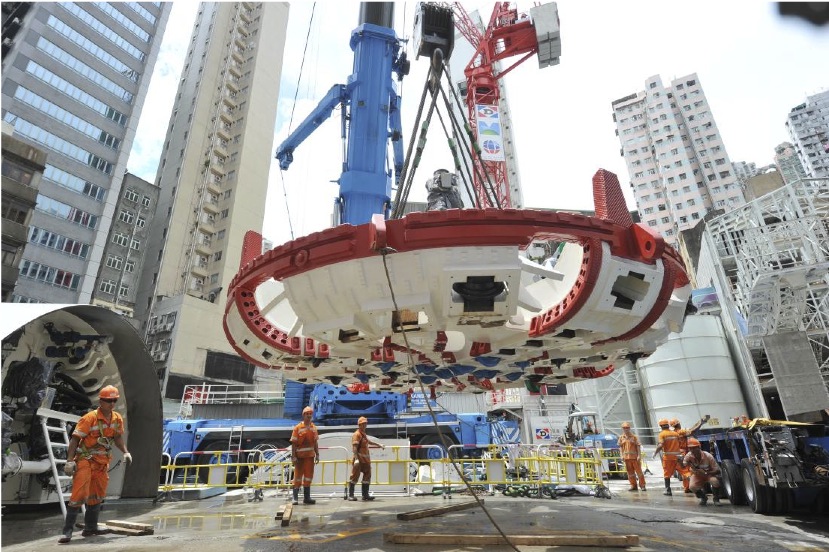 “Xi Shi”, the 6.5m diameter Herrenknecht TBM to be used on Contract 703 of Hong Kong’s West Island Line project, has arrived at the Sai Woo Lane site. Contractor JV, Dragages/Maeda/BSG is now preparing the machine that will commence excavation of the running tunnels between Sai Ying Pun  and Sheung Wan in October after being assembled in the construction shaft. The tunnels, being built for Client, the MTR, will connect Western District to the existing MTR network.

“Xi Shi” was commissioned in Nansha, China in April and shipped to Hong Kong in June. With a cutterhead of 6.5m in diameter and a length of 70m, delivery had to be

To minimise the impact of noise and dust to nearby residents, an 18m tall noise enclosure has been built at the Sai Woo Lane work site to fully enclose the equipment necessary to support “Xi Shi”.

“The TBM excavation covered by the noise enclosure will commence in early October and is the best construction method that will benefit the community in both environmental and traffic terms,” said Dave Salisbury, MTR Construction Manager for the West Island Line.

The West Island Line is an extension of the existing MTR Island Line from Sheung Wan to Kennedy Town.  The extension is scheduled to open in 2014.