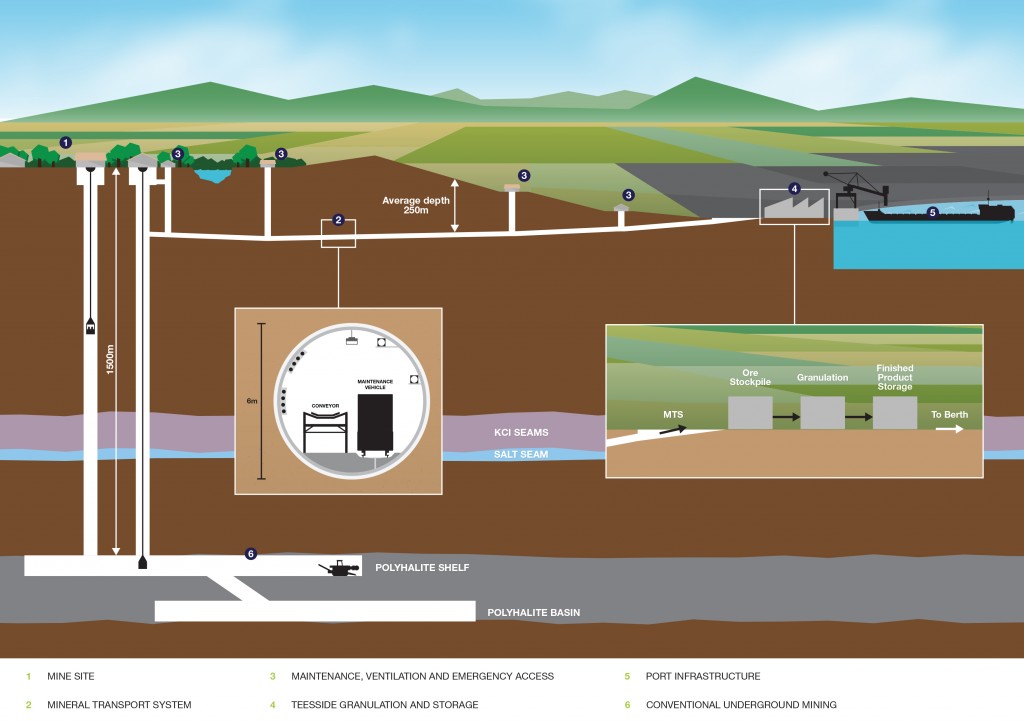 Plans for the world’s largest potash mine, York Potash in northern England, have been approved by a slim 8 to 7 majority vote by the North York Moors National Park Authority (NYMNPA). The new US$1.6bn development for Sirus Minerals includes the construction of a 36.5km long, 6m diameter Mineral Transport System (MTS) tunnel.

The MTS will run between the proposed mine to the materials handling facility at Teesside at depths of 120m to 360m and will be constructed using a combination of TBM and conventional mining equipment. It will contain a series of in-line conveyors capable of transporting at least 12M tonnes per annum of polyhalite and will be bored in five approx 7.5km long drives from 5 access shafts.

“Today’s decision is the culmination of hard work, of thorough examination and in-depth discussions of the largest planning application this National Park, and indeed any English National Park, has had to consider.

“I appreciate that there will be many disappointed by today’s decision but Members felt that the long term benefits for the local, regional and national economy were transformational. This truly exceptional nature plus the measures proposed by the company to mitigate harm and deliver widespread environmental benefits to the Park over a long period of time tipped the balance in favour of approval.”

Members acknowledged the considerable harm a development the size of the proposed mine will have on the special qualities of the North York Moors, particularly during the construction phase. They felt however that the projected long-term economic and social benefits to some of the most deprived parts of the region outweighed these concerns and provided the truly exceptional circumstances required by national planning policy to grant approval to a major development within a National Park.

The applicant, York Potash, estimates that the new potash mine could create up to 1,000 jobs and would also bring revenue benefits at a national level. Resources to compensate for the harmful impacts of the development will be paid by the Company over 100 years. The funding will be used for a variety of projects including tree planting and increased promotion of the wider North York Moors to potential visitors. The long term impacts of these would be of huge benefit to the biodiversity of the Park.

The NYMNPA will work closely with York Potash during the construction phase and beyond to ensure the detailed conditions associated with the approval of the plans are met.