In Seattle, the second TBM holed through the wall of Sound Transit’s future University District (U District) light rail station today, March 24, completing the fourth segment of the twin 3.5-mile tunnels that will serve light rail trains from Northgate to the University of Washington starting in 2021.

“Just days after we celebrated the opening of the new light-rail station at Husky Stadium, we’ve reached an important milestone on a tunnel project that will connect the University District to high-capacity mass transit,” said Sound Transit Board Chair and King County Executive Dow Constantine. “With more tunneling work under way and construction of Northgate Station starting this year, we’re on target to extend fast, reliable light-rail service to Northgate in 2021.” 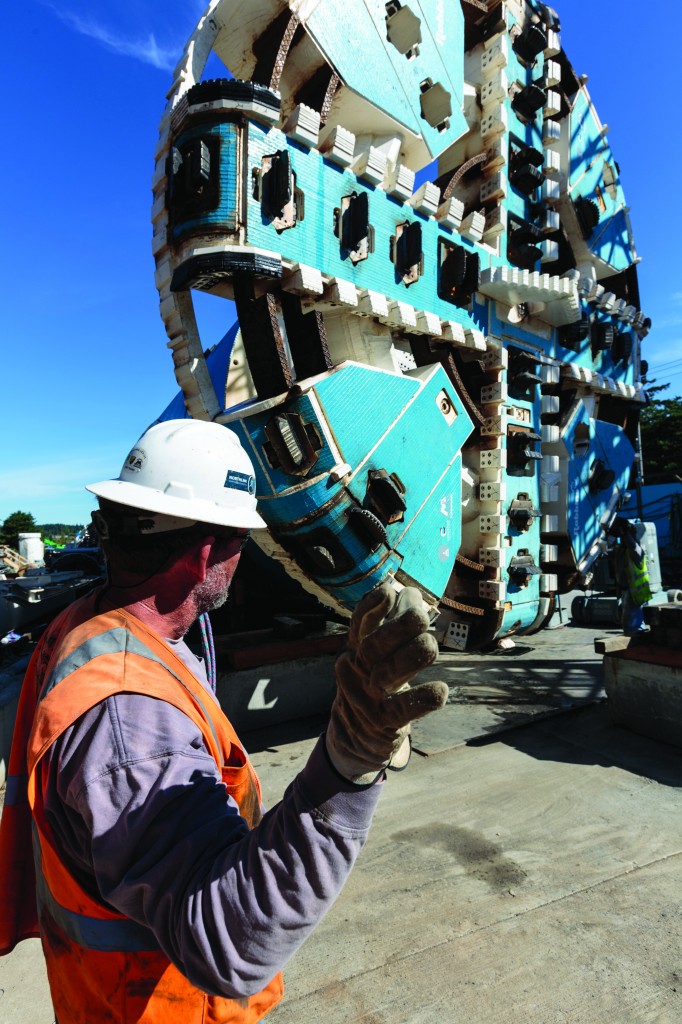 The machine was halted some 650ft (198m) north of the future U District Station on December 28, and investigations revealed the failure of one of the machine’s gear boxes and some damage to the bull gear (which spins the drive shaft and the cutterhead). At this stage, no one is sure what the cause of this damage was.

After limited repairs, the machine re-started on February 11, and finished her drive at reduced torque and speed.

Another, 21.5ft (6.5m) diameter Hitachi Zosen, EPB machine named ‘Brenda’ (which was used by Jay Dee/Coluccio/Michels JV on the U230 contract of the recently commissioned University Link extension) launched from the Maple Leaf Portal July 2014 and reached the U District Station site last November. She is expected to reach Husky Stadium within the next two weeks, completing the fifth tunnel segment on the project.

Both machines will undergo a thorough inspection at their respective hole-through sites. Once these inspections are complete, the contractor will determine which of the two machines it will use to mine the final tunnel segment. Crews will then spend two to three months refurbishing the selected TBM to prepare for its launch to the University of Washington.

Each TBM weighs 600 tons and is more than 300 feet long including the trailing gear. By the time tunneling is finished, more than 500,000 cubic yards of soil will have been excavated and more than 7,200 pre-cast concrete rings will have been installed to line the tunnels.