In Australia, Daniel Andrews has staked his credibility as Victorian Premier on beginning construction of the Melbourne metro rail line before the next election, having scrapped the former government’s plans for the East West Link cross-city road tunnel.

On Monday, February 16, Andrews announced that $40m in funding towards the Melbourne Metro had been fast-tracked ahead of the May budget. Those funds will be used to establish a Melbourne Metro authority to oversee immediate planning for the 9km tunnel through Melbourne’s CBD and five new stations; a project first announced by the Brumby government six years ago, then heavily altered under former premier Denis Napthine.

However, with an estimated cost of between $9bn and 11bn, Melbourne Metro ultimately remains dependent on billions of dollars in federal funding, with the Andrews government yet to secure any Canberra cash from Prime Minister Tony Abbott, who rejects a federal role in funding urban rail.

The Abbott government has previously said the $3bn in federal funding allocated to the East West Link could not be redirected to other projects. “We’re going to keep talking to Canberra, and I hope the government can be convinced a transformative project is something they can be partners with us on,” Andrews said.

Despite the challenges, Mr Andrew said: “The private sector will be, I think, a very willing partner, and they may be able to commit up to a third (of the funding).” 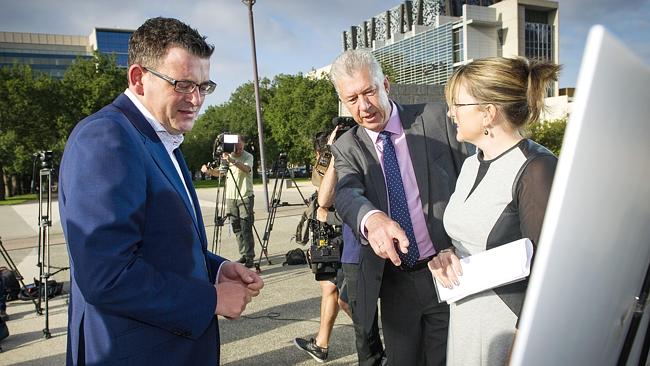 Andrews said construction was expected to be complete by 2026, allowing 20,000 extra passengers during the morning and afternoon peaks: “Planning in 2015, detailed design in 2017, construction beginning in 2018. If we can do better than that, we will.”

Andrews said the Melbourne Metro project would give Melbourne a public transport network equal to New York, London, Paris or Hong Kong. “This is about making sure that the world’s most liveable city has a 21st-century transport system,” he said.

He promised the government would release the business case for Melbourne Metro, which will be written this year: “The business case will be public, we are absolutely determined to make sure there is as much transparency as is possible.”

A map of Melbourne Metro released on Monday showed that the rail tunnel would have five stations, as originally conceived, and run beneath Swanston Street. The anticipated disruption of about two years to Swanston Street was one of the key reasons former premier Denis Napthine gave for scrapping the Melbourne Metro project.

“Swanston Street is one route, there is talk about alternative routes,” Andrews said.

Infrastructure industry lobby group Infrastructure Partnerships Australia welcomed the establishment of a new authority for the project, but warned the Andrews government to first resolve the contractual issues hanging over the cancelled East West Link.

“Industry welcomes the momentum gathering behind the Metro project, but it is very important the government resolves the East West Link issue first, as ongoing uncertainty would inflate the costs of Melbourne Metro and other projects,” chief executive Brendan Lyon said.

Federal Greens senator and transport spokeswoman Janet Rice called on Prime Minister Abbott to redirect the $3 million he had committed to the East West Link to Melbourne Metro.