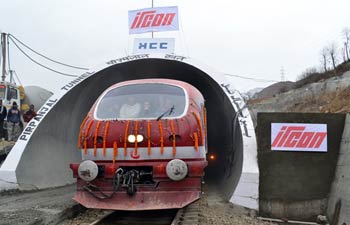 A 100 years after it was initially conceived, Prime Minister Manmohan Singh inaugurated India’s longest rail tunnel – the 11.2km long Pir Panjal Tunnel – on Wednesday, June 26. Built at a cost of Rs10bn (US$201.8 million), the T-80 tunnel will provide a second, all-weather, link to the Kashmir Valley, which often becomes inaccessible in winter when the road through the 60-year-old Jawahar tunnel is blocked because of snow.

Construction of the 8.4m wide x 7.39m high tunnel began in November 2005 and was undertaken by Ircon International, Hindustan Construction Corp and Geoconsult-RITES JV. It has five groups of five roof-mounted ventilation fans, and safety systems including CCTV cameras every 62.5m, fire detection and hydrants every 125m, emergency telephones every 250m, alarms every 250m, air quality monitoring every 500m, escape route signs every 5 m, emergency lighting and a public address system. There is also a 3m wide road for rescue and maintenance, along with a 772m escape tunnel. The remaining 6.5km of the rail route is in cuttings up to 11.2m deep or embankments 16.7m high, with 39 bridges.

The 17.7km rail link is part of the Udhampur-Srinagar-Baramullah Rail Link (USBRL) project that will eventually link Kashmir to the rest of India. For now, there will be train services from Banihal, in Jammu, to Qazigund, in Kashmir valley, and onward to Srinagar and Baramulla. The rail link from Banihal to Udhampur in Jammu, expected to be completed by 2017, will then provide a seamless connection to the rest of the country. 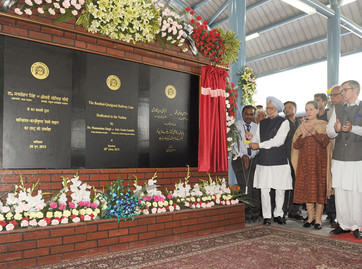 “The UPA’s agenda is to connect Kashmir with the rest of the country through rail links. The start of train services between the two regions is an outcome of stupendous effort. It is an engineering marvel and fulfills the dream envisioned by the late Maharaja Pratap Singh in 1898,” the Prime Minister said at a high-profile function to mark the event.