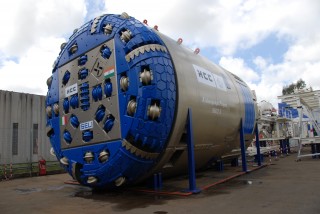 Italian tunnelling specialist SELI has celebrated its 60th Anniversary by manufacturing a 400-ton, 6.18m diameter DSU TBM painted gold, for the Kishanganga tunnel project in India. The gilded machine was delivered to the main contractor HCC (Hindustan Construction Company) today during an official ceremony at the company’s factory in Aprilia. The DSU TBM will bore 700-1000m under the Himalayas, crossing critical geological conditions of localised poor and squeezing rock as well of fault zones.The TBM has been specially designed to cope with the ground conditions and improve them through extensive pre-treatment works.

The TBM, is equipped with 8 no. AC motors of 315 kW each, generating a total cutterhead power of 2520kW, controlled by a VFD system. Main and auxiliary thrust have also been over-specified.

The TBM will have high conicity, to cope with squeezing rock, and the shields are equipped with a special bentonite injection system to lubricate the shield in contact with the rock to reduce shield friction. Overboring and overcutting facilities will create further increases in the clearance around the shields in bad rock conditions under high cover.

Convergence measurements will be performed continuously during excavation through specific holes in the front shield.

The company was founded by Mr. Carlo Grandori in 1950, and it was he who introduced mechanised TBM excavation technology to Italy in 1969 and, alongside Mr. Dick Robbins, designed and manufactured the first Double Shield TBM.

SELI claims to be the only company in the world that acts as TBM manufacturer and TBM tunnelling contractor, with experience of 800km of tunnels in over 100 projects all around the world.

The new SELI factory under completion in Aprilia (Rome) will boost the TBM production capacity from today’s 8 units per year to over 20 units, with boring diameters exceeding 15m diameter.