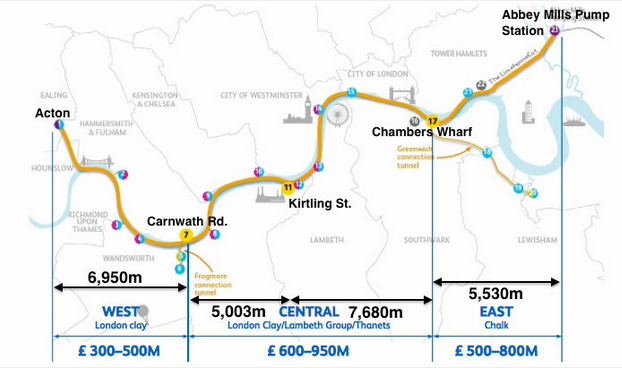 AECOM has officially announced that it has been formally appointed as the lead design consultant for the central section of the Thames Tideway Tunnel in London, one of three major work packages on the scheme. AECOM’s client is the delivery partner for the central section, a joint venture (JV) of Ferrovial Agroman and Laing O’Rourke.

The Thames Tideway Tunnel is required to modernise London’s Victorian wastewater infrastructure and is set to be the biggest infrastructure project ever undertaken by the UK water industry.

AECOM will deliver design services for the 12km central section of the tunnel from Carnwath Road in Fulham to Chambers Wharf in Bermondsey, the largest section on the route. The hub for tunnelling activity will focus around the Kirtling Street shaft in Battersea, where both the east and west tunnelling machines will be launched. The entire 25km sewer tunnel generally follows the route of the River Thames, starting in west London and travelling to Limehouse, where it then continues north-east to Abbey Mills Pumping Station near Stratford. There it connects to the Lee Tunnel, which will transfer the sewage to Beckton Sewage Treatment Works. AECOM also delivered design consultancy services for the Lee Tunnel project, which is currently under construction and due to be completed in 2016.

The complex central section of the tunnel will pass through a variety of different ground conditions, including London Clay, Lambeth Group, Thanet Sands and Chalk. It will be built under London’s existing underground infrastructure, in close proximity to tube lines and utilities. The designs will also need to minimise disruption to the busy, compact London streets above. AECOM brings its experience of other major underground infrastructure projects in London to the scheme, such as its work on the central underground section of Crossrail, which includes the detailed designs of both Paddington and Farringdon stations.

Steve Woodrow, AECOM’s head of tunnels, Europe, said: “Tideway is one of the UK’s most important new infrastructure projects, which will dramatically improve the water quality of the River Thames and give London a wastewater system it can rely on. AECOM’s tunnelling team brings its recent experience delivering the Lee Tunnel to this key civil engineering project.”

Peter Main, project director for the Ferrovial Agroman, Laing O’Rourke JV, said: “The central section of Tideway is a major feat of engineering and AECOM brings valuable expertise in tunnelling design services that will enhance and strengthen our delivery team.”

AECOM is currently working with the Ferrovial Agroman, Laing O’Rourke JV to deliver the detailed designs for the central section. Construction will start in 2016 and the project is expected to be completed in 2023.