On July 25, 2022, ‘Big Tex’ a Robbins Main Beam TBM successfully broke through in Dallas, Texas, USA on the 8km long Mill Creek Drainage Relief Tunnel. Contractor JV Southland/Mole drove the machine through in chalk and shale at up to 498m advance in one month. “I think when you step back and look at what was accomplished by this team as whole…the overall length and size of this tunnel, the TBM conversion, the everyday grind to keep moving forward…it truly is something to be proud of, professionally and personally. No single individual could reach this milestone. It took a great team of skilled individuals. I am fortunate to be a part of it,” said Nick Jencopale, Sr. Project Manager for contractor JV. 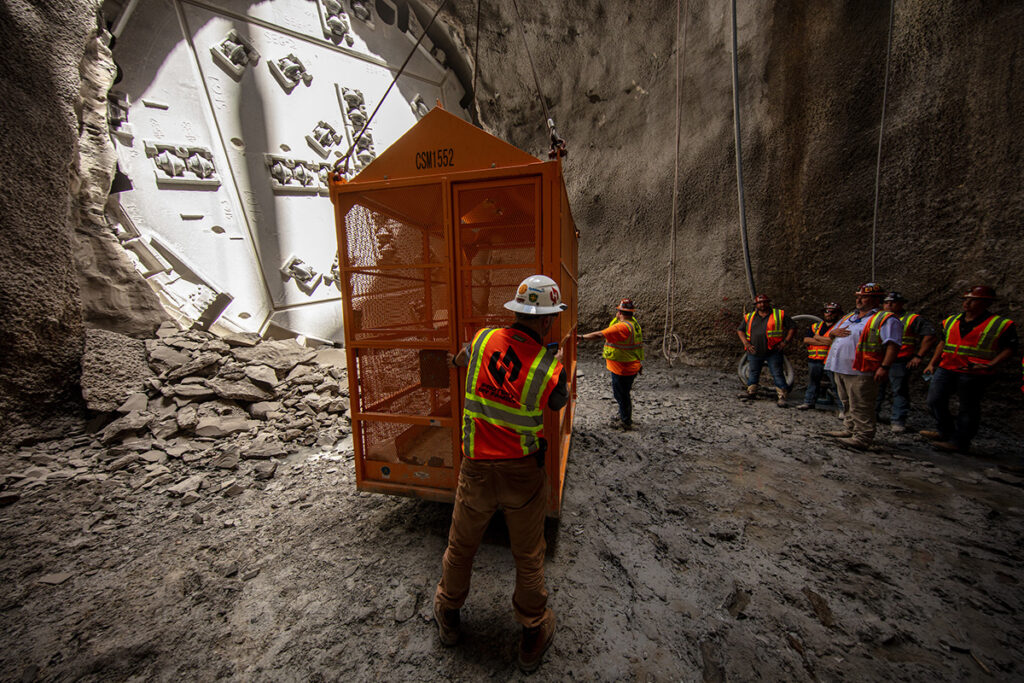 Good advance rates were not the only cause for celebration: the unique project required a planned in-tunnel diameter change of the TBM from its original 11.6m to a more compact 9.9m. The first-of-its-kind conversion process was undertaken 2.8km into the bore and was not done inside a shaft or pre-excavated portal. “The TBM conversion was a unique challenge that we were excited about, and ultimately provided a more efficient method for the desired product compared to the alternative options. Hopefully the successful conversion proved that this option can be considered for future tunnel projects,” said Jencopale.

While there were many detailed steps to the conversion process, precision design of the machine was a key aspect. “We started with a smaller machine, then we made a kit or second skin that was slightly larger. And then when the time came, we just took that skin off. It was essentially that simple,” said Evan Brinkerhoff, Robbins Field Service Manager. The conversion took about four months and was completed in April 2021.

“The Robbins Main Beam TBM (‘Big Tex’) performed consistently throughout the duration of the tunnel excavation. There were very minor issues and little overall downtime as a result of the TBM itself,” said Jencopale. Due to the relatively favorable ground conditions in much of the tunnel, including low rock strength and low abrasivity, only eight disc cutters were changed during the length of tunnel bored at the larger diameter. At the time of diameter change the full dress of cutters was changed, and since that change only 14 cutters have needed replacing. Crews did encounter some fault zones, and installed rock bolts and wire mesh in the tunnel crown as needed.

With the TBM-driven portion of the tunnel now complete, work can commence to remove the machine from the tunnel and install a final lining. The tunnel is a designated critical infrastructure project for the City of Dallas, providing 100-year flood protection for areas of East Dallas that have experienced severe flooding in the past. Construction work is expected to be complete in late 2024/early 2025.