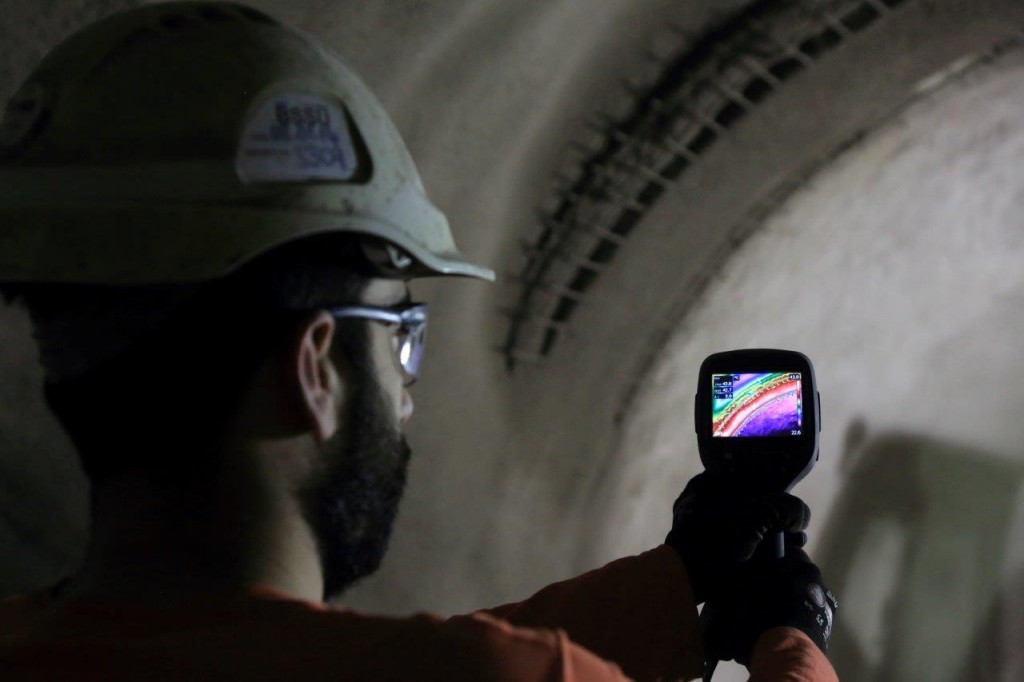 A groundbreaking new way to test the strength of sprayed concrete has been successfully tested at the UK’s Bond Street Station Upgrade (BSSU) project.

The project, a joint venture between Costain and Laing O’Rourke on behalf of London Underground Ltd, is the first in the world to test the new technique in a production environment.

The technique under test is Strength Monitoring Using Thermal Imaging (SMUTI), a patent-protected invention created by Dr Benoit Jones from Cambridge University. It uses a thermal imaging camera to track the temperature of concrete as it is sprayed to form the tunnel lining. Knowing this temperature history enables the engineers to calculate the amount of hydration that has taken place in the concrete, and hence its strength.

It is a significant step forward for health and safety, said Aled Davies, Costain Senior Tunnel Engineer who has worked closely with Dr Jones on the trials.

“SMUTI allows us to directly monitor the compressive strength development of sprayed concrete whilst remaining at a safe distance. This is a substantial improvement over the current method, which relies upon a small test panel being representative of the entire sprayed concrete advance to prevent personnel being at risk from sprayed concrete lining falls.”

In March, following extensive laboratory testing, production trials began on-site at BSSU. First, the concrete in 12 sprayed concrete panels was tested simultaneously using the established in-situ tests and SMUTI. This provided sufficient data to carry out trials in an actual production environment and in March, BSSU implemented the SMUTI system alongside existing test methods for the first time.

“The trials have gone very well and the workforce was very appreciative of the time and efforts being taken to improve their safety,” said Aled. “The data is now being analysed but we hope to have the results by September, when we will present them to tunnelling sector clients and design partners. We hope to see SMUTI become the primary method of early strength monitoring on all tunnelling projects.”