The Auckland City Rail Link (CRL) celebrated a major milestone on December 06, with the breakthrough of the Albert Street tunnels to the CRL tunnels across the Commercial Bay site, in Downtown Auckland.

The City Rail Link, which is jointly funded by the New Zealand Government and Auckland Council, is the largest infrastructure project ever to be undertaken in New Zealand and consists of a 3.45km twin-tunnel rail link up to 42m below the city centre. When complete it will carry more than 50,000 passengers during peak hours.

Mayor Phil Goff said, “With the Albert Street trench excavation complete we are one step closer to delivering Auckland’s first underground rail line. The CRL will not only change the way we travel through Auckland’s central city, it will significantly enhance the efficiency of our entire public transport network, freeing-up our streets from bus congestion and delivering more efficient and frequent train services across the city. We are transforming Auckland. Changing the way we live, move and play. It’s good for the city and great for its people.”

CRL’s CEO Dr Sean Sweeney, said, “The City Rail Link is a city-shaping project that will completely transform the way people move around the city. Today’s milestone is an exciting step that brings us closer to delivering the project’s many benefits for Auckland. While there has been some recent media focus on the financial issue with one contract, it’s business as usual with CRL and today’s breakthrough proves we’re on track and making great progress.”

Dr Sweeney added that the nature of this project has made today’s milestone even more significant. “It’s fair to say that getting to this point has not been without its challenges. This is the largest transport project ever undertaken in New Zealand and building it within the middle of a built-up city is no small task. The nature of the excavation, the tight confines and the location all make building this project extremely complex and I’m delighted with the progress we have made to date.”

The breakthrough itself has been a gradual process over the past month that has required a staged approach to excavation, construction of shotcrete support between piles, and demolition of temporary concrete piles separating the two sites. The tunnels between the two sites, meet under the Customs Street traffic deck which was built last year to keep traffic moving while the work is carried out underneath. 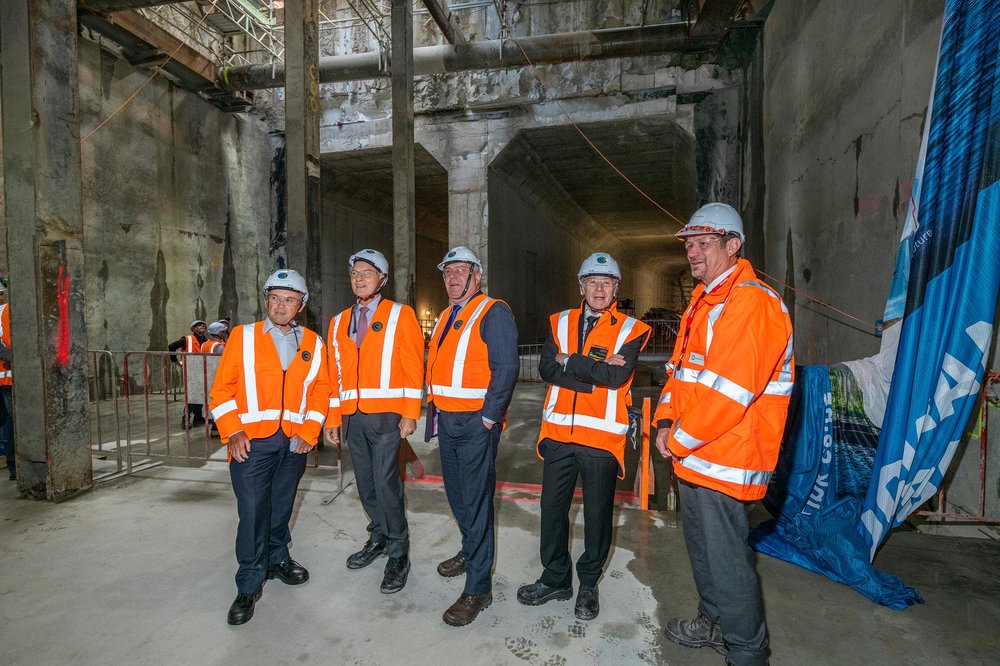 Dr Sweeney says now the CRL contractor Connectus (McConnell Dowell and Downer JV) team can complete the construction of the remaining third of the tunnel box and backfilling of the trench will continue until it is completely covered – expected to be mid-2019.

Early next year the tunnels from the former CPO (Britomart) site will also connect to tunnels across the Commercial Bay site – providing a complete tunnel section from Britomart through to Wyndham St. “This project continues to progress and take shape at pace and we’re thrilled that Aucklanders are starting to see the outputs of all the hard work that is going on right underneath their city,” said Dr Sweeney.

A snapshot of the Albert Street Trench in numbers:

In April 2015, two Early Contractor Involvement (ECI) contracts were awarded to provide early input into the CRL design and construction for two ‘early works’ or ‘enabling works’ packages to be undertaken in the Downtown area.

Downer NZ and Soletanche Bachy (DSBJV) were awarded a contract to progress the CRL work through and under Britomart Station and Queen Street to the site of the former Downtown Shopping Centre site, now the Precinct Properties Commercial Bay development. Construction commenced in July 2016.

Meanwhile, Connectus (McConnell Dowell and Downer JV) were chosen to construct the cut and cover tunnels under and along Albert St from Customs Street to Wyndham Street.

In 2014, a consortium of engineers and architects led by Aurecon was awarded the role of Principal Technical Advisor (PTA) and contracted to work alongside the CRL project team. The role is to deliver reference design for the CRL. The consortium includes Mott Macdonald, Arup and architects Grimshaw & Jasmax.

The City Rail Link Ltd, which came into being on 1 July 2017, has full governance, operational and financial responsibility for the CRL, with clear delivery targets and performance expectations. The project’s total cost will be within a funding envelope of NZ$3.4bn. Completion date of the CRL is due in early 2024.