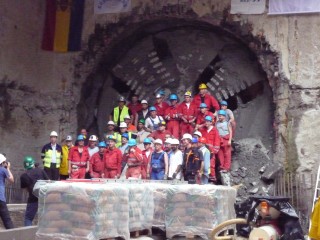 Tunnelling contactor JV, Bamco, for the US$1.6bn Budapest Metro Line 4 Phase 1 has broken through the first of its two 6m diameter Herrenknecht EPBMs at Keleti Station, completing the 7.4km long south running tunnel, with the second EPBM due to complete boring of the north tunnel at the same station in just over a week’s time.

Bamco was awarded the US$260M, design and build FIDIC form tunnelling contract in February 2006 with actual boring beginning in April 2007.

The EPBMs started boring and erecting the segmental lining from Kelenföldi Station on the Buda west side of the River Danube and drove through clay up to Fövám Station on the east side of the Danube where the ground changed to mixed sand, gravel and clays. Boring progressed well throughout, with the exception of initial problems with partial collapses at the second station, Tétényi út.

Also included on Phase 1 is the construction of 10 stations, one of which, Gellért tér Station is also being constructed by Bamco. This open cut station includes the NATM construction of the station platforms and a NATM enlarged bored running tunnel crossover, which is experiencing some delays. The other nine open cut stations have been awarded under various contracts to Porr, Bilfinger Berger and Obayashi, among others.

Phase 1, which was conceptually designed by Mott MacDonald, and local companies Fomterv and Uvaterv is due to open next year.

Phase 2 will see the line extended a further 3.2km from Keleti to Bosnyak tér, and planning is in process, although this could be held up due to a recent change in Hungarian government. Opening of Phase 2 is due in 2013.