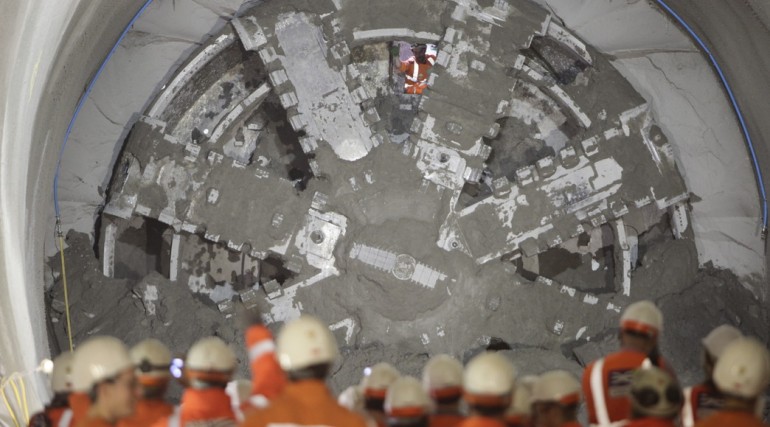 London’s Crossrail train tunnels are now three quarters complete reaching the 32km mark,  following the breakthrough of Victoria, one of the project’s EPBMs, into Whitechapel station.

The 150 metre long machine began her journey at Limmo Peninsula in east London at the end of 2012. She broke into the huge underground space at Whitechapel where work is taking place 35m below the surface to create over a kilometre of new platform and passenger tunnels for the new Crossrail station.

During the second half of 2014, whilst tunnelling will continue, the project’s focus will begin to shift to the substantial job of fitting out the stations and tunnels.

The Mayor of London, Boris Johnson, said: “With three quarters of tunnelling complete, we’re tantalisingly close to finishing what is without doubt a monumental feat of engineering. It’s quite remarkable what the Crossrail team has achieved so far and we now look forward to the next exciting stage of the project – the fitting out of the Crossrail stations of the future.”

Rail Minister Stephen Hammond said: “Crossrail is set to transform rail travel across the South East when it opens in 2018, improving journeys for thousands of passengers and securing long-term economic benefits across the region and beyond. This is a major milestone in the Crossrail project, and I am delighted with the progress that is being made.”

Crossrail Chief Executive Andrew Wolstenholme said: “Our tunnelling marathon deep beneath the streets of the capital is continuing apace with the construction of the new rail tunnels now three quarters complete. Over the past two years, our huge machines have built more than 19 miles of tunnels and removed more than two million tonnes of earth.”

Three of Crossrail’s boring machines have already retired, with a further five still in use.

In the west, the tunnels between the Royal Oak Portal and Farringdon are complete.

In the east, Victoria and Elizabeth have reached Whitechapel; Ellie is heading towards Stepney Green and Jessica is being prepared to complete Crossrail’s shortest tunnel drive between Limmo Peninsula and Victoria Dock.

On the south east section of the route, Sophia has finished her drive and Mary is heading under the Thames.

When Crossrail opens in 2018, it will increase London’s rail-based transport network capacity by 10 per cent and dramatically cut journey times across the city, bringing an extra 1.5 million people to within 45 minutes of central London.