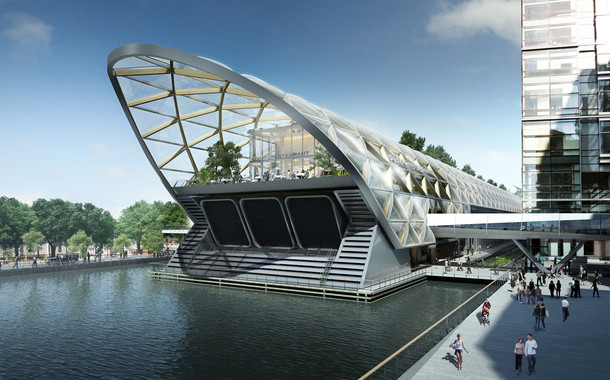 Construction of the Crossrail project began at North Dock in Canary Wharf less than three years ago. Since then the construction team has driven over 1,000 piles and pumped nearly 100 million litres of dock water. Approximately 300,000 tonnes of material has been excavated from beneath the dock bed and almost 375,000 tonnes of concrete poured.

Canary Wharf Contractors Limited, the construction arm of Canary Wharf Group, has created a station box that is more than 250m long and 30m wide, approximately the same size as One Canada Square laid on its side, Britain’s tallest operational building. Twenty-eight metres below the surface of the dock, twin 7.6m diameter rings are now in place at both ends of the station ready to receive the eastern tunnel boring machines.

Bill Tucker, Crossrail Area Director Central said: “Construction of Crossrail’s first excavated platform level is now complete and has been delivered five months early by Canary Wharf Group. Preparations will now begin for the arrival of the tunnel boring machines next year. When the tunnelling machines breakthrough into the station box from the east they will undergo maintenance before being moved to the other end of the station box where they will then set off on their journey en route to Farringdon via Whitechapel and Liverpool Street stations.”

After the TBMs pass through, Canary Wharf Group will fit out the station with work due to complete in 2015. Work will continue to construct the levels sitting directly above the station box.

Canary Wharf Crossrail station will be one of the largest stations on the Crossrail route.

In December 2008 Canary Wharf Group plc signed an agreement with TfL, DfT and Crossrail to design and construct the station box for a fixed price of US$798M, of which US$239M is contributed by Canary Wharf Group.

Crossrail construction commenced on 15 May 2009 when the first tubular 18.5m long pile was lowered into the waters of North Dock at Canary Wharf. The project used a special silent ‘Giken’ piling system which minimises disruption to local businesses and residents. This was the first time this Japanese technology had been extensively used in the UK.

On 26 March 2012, Canary Wharf Group will hand over to Crossrail Limited the station box platform level.