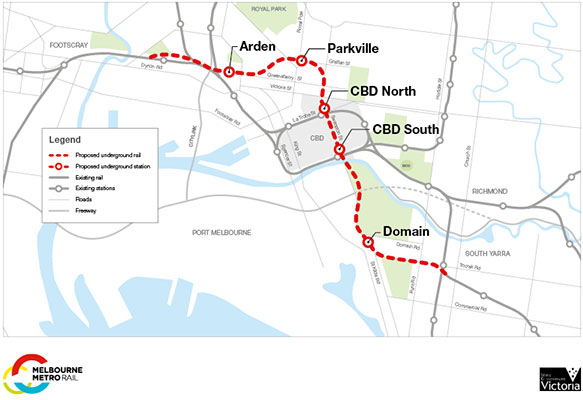 The Andrews Labor Government in Victoria, Australia has announced $1.5bn to cover all anticipated planning, design and significant early works ahead of major construction of the Melbourne Metro Rail Project in 2018. The project includes the construction of twin 9km long tunnels and five underground stations.

The huge funding injection provided in the 2015-16 Victorian Budget will allow the Melbourne Metro Rail Authority to complete the reference design, undertake the statutory planning process and get this public transport mega-project started.

The funding also provides for land acquisition, preparation of Expression of Interest and Request for Tender documents, and significant early works such as tram rerouting and service relocations, ahead of contract award and major construction of the tunnels.

Premier Daniel Andrews and Minister for Public Transport, Jacinta Allan, made the announcement today at the project’s first geotechnical testing site since the project was abandoned by the previous Liberal government.

Geotechnical investigations are a key part of planning and designing the project, providing critical data about ground conditions and soil quality. The information gathered will inform the precise alignment, depth and design of the new rail tunnels and underground stations.

Over the coming months 140 boreholes will be drilled between South Kensington and South Yarra. This testing builds on previous geotechnical work undertaken for Melbourne Metro Rail, and will be complemented by site surveying, underground service identification and other preparatory works.

The Melbourne Metro Rail Project will transform our rail network into an international style metro system, like London or New York. It will increase the capacity, reliability and efficiency of Melbourne’s busiest train lines, allowing 20,000 more passengers to use the train system in peak hour.

Minister for Public Transport, Jacinta Allan said, “To build underground tunnels, you need to know exactly what’s under the ground. That’s what geotechnical testing will tell us.”