The UK’s HS2 has revealed the first images of its first two TBMs set to be launched on the project later this year and that will spend around three years digging the longest and deepest HS2 tunnels – from just inside the M25 to South Heath in Buckinghamshire. 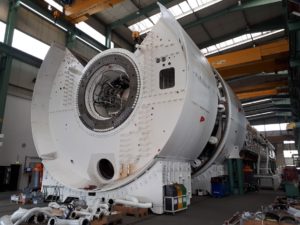 The Herrenknecht 10.26m diameter TBMs are 170m in length will bore the 16km long Chiltern Tunnels at depths up to 80m. The tunnels, being construcred by the Align JV – a joint venture formed of Bouygues Travaux Publics, Sir Robert McAlpine, and VolkerFitzpatrick, will feature a segmental lining with segments of 2m x 4m and a weight on average of 8.5 tonnes each. The internal diameter of the tunnels will be 9.1m, and 112,000 segments will be required to complete both tunnels.

Mark Thurston, Chief Executive of HS2 Ltd, said: “The construction of HS2 is set to be an amazing opportunity to showcase global capability and innovation in the design and delivery of major infrastructure, and the Tunnel Boring Machines are one of the most fascinating aspects. Like mini cities, they will spend 24 hours a day, seven days a week boring under the Chilterns so that the homes and habitats above remain undisturbed.

“This is just one of many ways in which HS2 is delivering on its responsibilities to our neighbours and the natural environment and, when complete, the new railway will play a key role in reducing transport carbon emissions and improving air quality for the next generation.”
After completion the first two machines will be disassembled before beginning their journey to Britain from Germany. Once they have arrived on site, each TBM will be reassembled, ready for launch and to begin their life underground.