The US rail operator will ask the federal government for $50 million to spend on preliminary engineering for the “Gateway Project” that includes twin tunnels under the Hudson River as a substitute for the Access to the Region’s Core (ARC) project, which New Jersey Governor Chris Christie (R) pulled state funding on last October. 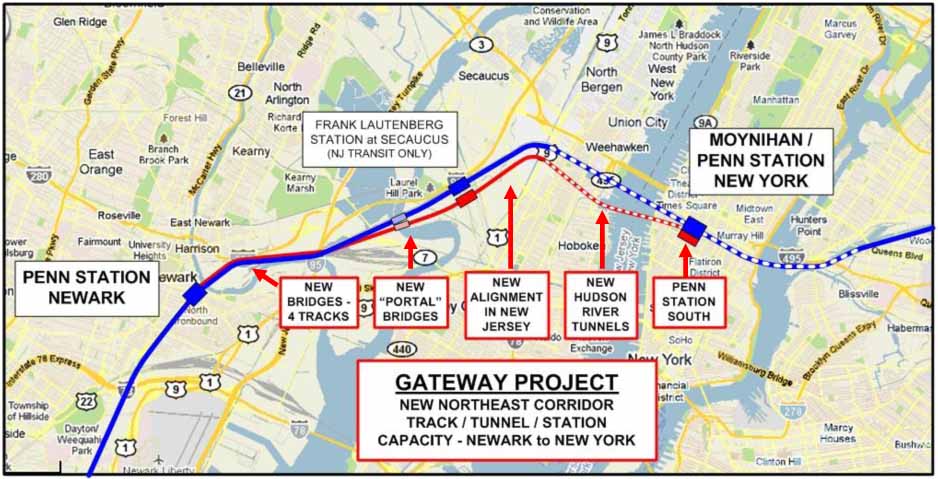 “New Jersey is facing a transportation crisis,” Sen. Lautenberg said. “When the ARC tunnel was canceled, it was clear to me that we couldn’t just throw up our hands and wait years to find another solution. Amtrak answered the call. The Gateway Project is a vision for our future that will shorten commutes, create jobs, increase property values and grow New Jersey’s economy.”

Amtrak had been looking to build a second tunnel to increase capacity beyond its existing tunnel, which opened in 1910, and to allow for a higher-speed line along the Northeast Corridor — but not for decades. Following the cancellation of the ARC Tunnel project, and with the encouragement of Senator Lautenberg, Amtrak expedited its plans. 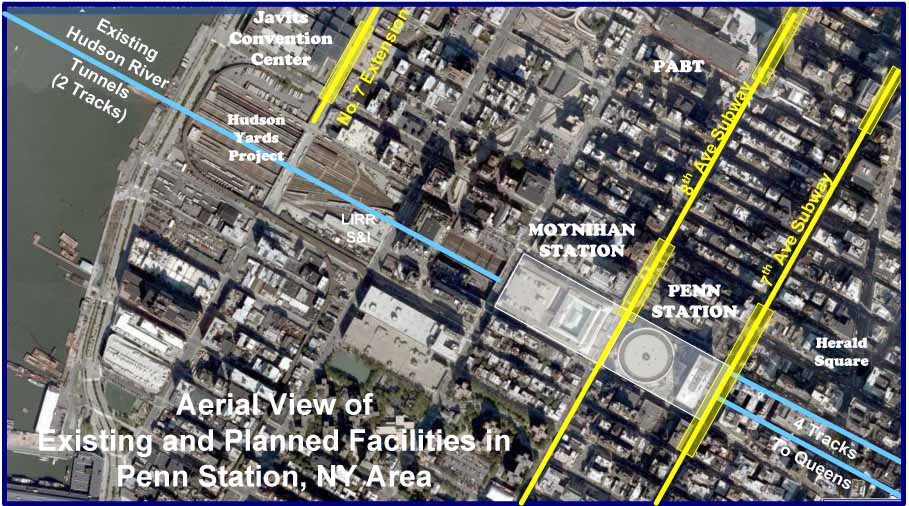 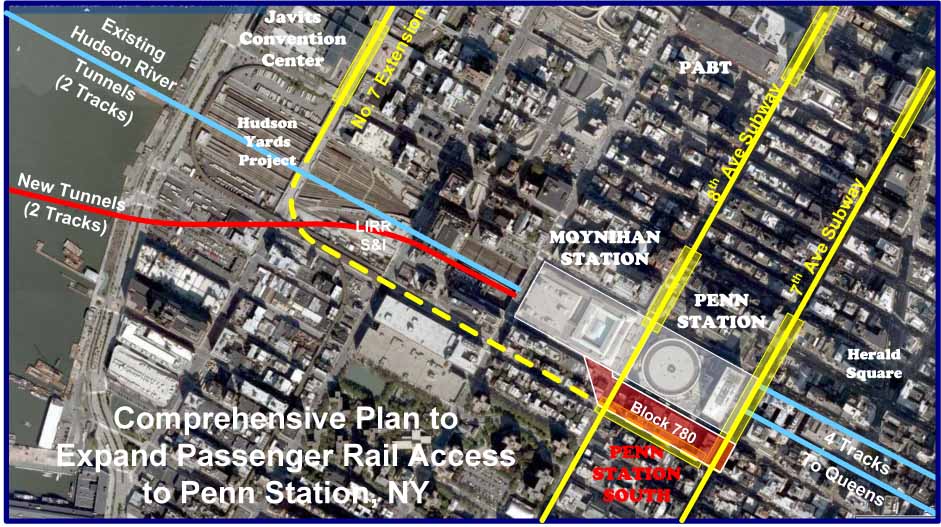 The main Amtrak/New Jersey Transit (NJT) rail link between New York and New Jersey carries 62 trains a day; the new proposal would raise that number to 92. Underscoring the current congestion problems, an Amtrak derailment in Queens on Monday afternoon blocked access to East River tunnels and brought the evening rush hour to a standstill.

The Gateway Project calls for new Hudson River tunnels to open in 2020, two years later than the cancelled ARC tunnels. It would also follow the same basic nine-mile path from Secaucus to New York that had been proposed for ARC’s twin tunnels.

However, the ARC tunnels would have ended short of New York’s Penn Station, which serves Amtrak in addition to Long Island Rail Road and NJ Transit commuter trains. The proposed Gateway tunnels instead connect directly to new tracks at Penn Station, saving commuters a few blocks walk. Also unlike the ARC project, Amtrak will have use of the Gateway tunnels, so the project will not increase capacity as much for NJ Transit riders. But it is likely to be a cheaper project for New Jersey due to the proposed additional stakeholders.

Amtrak, a government-owned corporation whose board members are appointed by the president, said it would look for contributions from New Jersey, New York and government agencies to cover the cost of construction. Christie did not rule out making a future contribution to the project but said there is no money for a tunnel now. He also said any future contribution from the state would depend on a review of the project’s merits. 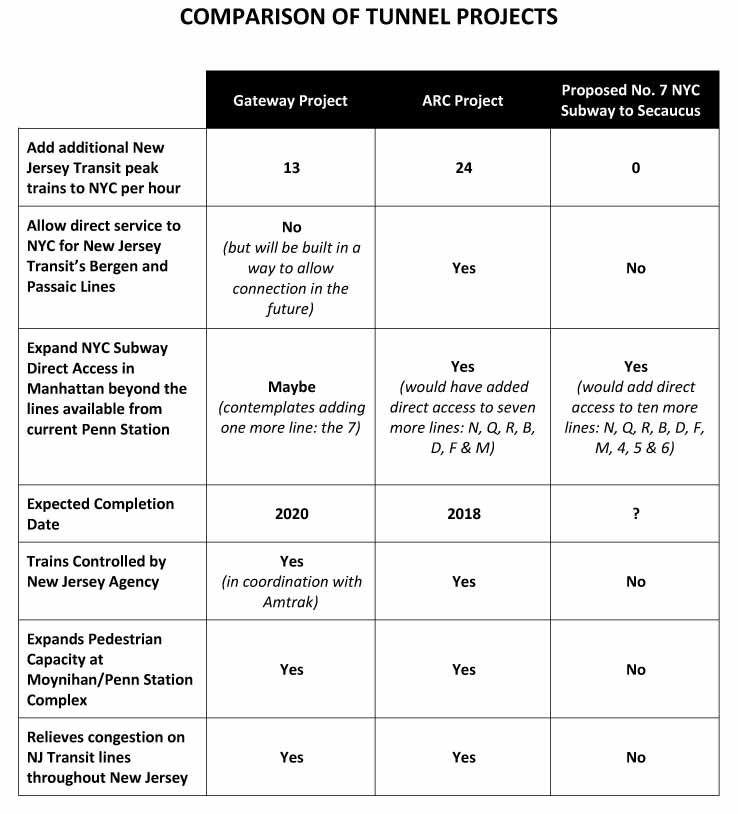 “New Jersey always rises above challenges – and today’s announcement continues us along that track,” Sen. Menendez said. While some choose to do nothing and accept delays, the people of New Jersey cannot, will not, and must not, wait. We are moving full steam ahead with this strong investment in New Jersey and the region. We are on a path to create good-paying jobs and move people and goods more quickly,”

The proposal was heartening to New Yorkers, too. “The fact that even Amtrak is working to make this happen shows how important it is to the region’s job growth and economic future,” Sen. Charles Schumer (D) of New York said in a statement.

New Jersey governor Christie killed plans to build the ARC project in late October, shortly before tunnel construction was due to commence. Christie has since refused to pay the federal government New Jersey’s $271 million share of the bill for work done on the project. At an estimated cost of $9.8 billion, the ARC commuter rail tunnel would have been the nation’s biggest public works project — a title the new $13.5bn Gateway proposal will continue to hold if it moves forward. 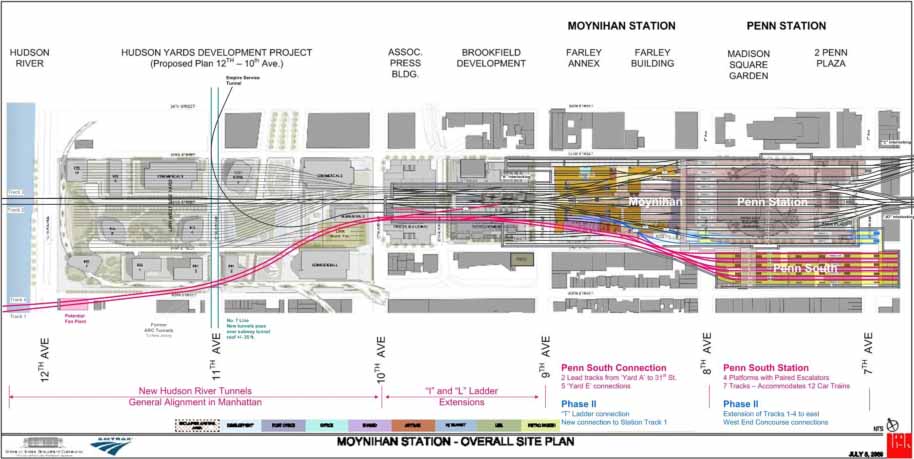