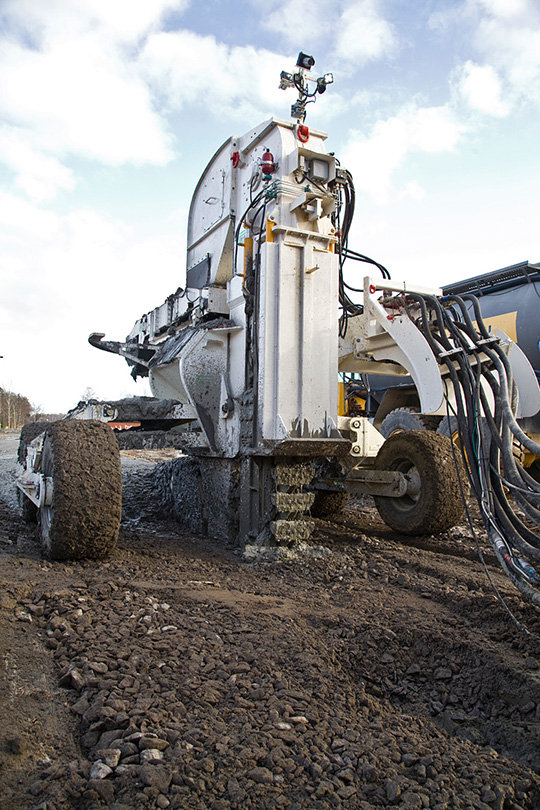 Herrenknecht’s newly developed semi-trenchless method for pipeline installation has completed its third successful mission. South of Stockholm, using Pipe Express® Züblin Scandinavia AB installed a water pipeline more than a kilometer in length within twelve days. Groundwater lowering was not required despite a water level just below the terrain’s surface. Compared to conventional open-cut construction the method has significantly less impact on the environment, while simultaneously minimizing costs.

Mats Ohlsson, project manager of client Stockholm Vatten said: “For open-cut construction we would have needed sheet piles and we would have had to lower the groundwater.” The Pipe Express® method from Herrenknecht, however, requires no lowering of the groundwater. The construction company made the most of this enormous budget and time advantage. It used Pipe Express® for the laying of a 1,036m long section of a 48-inch water pipeline near Huddinge, some 10km south of Stockholm. Drilling started on February 22, and completed on March 5, 2015. In the most productive 12-hour shift, 221m of pipeline disappeared into the ground; the average construction performance was 0.70m per minute. About 60 percent of the construction time was taken up just with welding and coating the up to 224m long steel pipe strings.

Michael Lubberger, Senior Product Manager Pipeline at Herrenknecht, is proud of the success in Sweden: “After the pilot project in the Netherlands and the subsequent deployment in Thailand, this is already our third drive with Pipe Express®. We see strong potential for the new method on the pipeline market.” The keen interest of international specialists on the site confirms this view.

Pipe Express® from Herrenknecht is a new, semi-trenchless near-surface pipeline installation method. In this method, a buggy with a trenching unit creates a narrow, approximately 40cm wide trench on the surface. Below it in the soil a boring machine digs the actual tunnel with diameters of up to 1.5m and lays the pipeline at the same time. The excavated soil is brought to the surface by the trenching unit and backfilled in the trench again behind the machine, laborious finishing work is not required. The pushing force for both excavation unit and pipeline is provided by a Herrenknecht Pipe Thruster located at the starting position.

In contrast to the conventional construction method the corridors, including construction paths, are up to 70 percent narrower. Extensive earthworks, groundwater lowering, the ramming of sheet piles etc. are not necessary. Up to 2,000m long pipelines with a diameter of 900 – 1,500mm (36″ – 60″) can thus be laid quickly and cost-efficiently.

The company Stockholm Vatten produces around 370,000m3 of drinking water daily for the 1.3 million residents of the Swedish capital. Züblin Scandinavia AB were contracted to add one kilometer of pipeline south of Stockholm to the existing network.