HS2 has revealed the first images of one of HS2’s largest construction sites in the UK’s Midlands, which is being prepared for the launch of a TBM that will dig under Long Itchington Wood, creating a 1.6km long twin-bore tunnel, before the route heads North and swings into Birmingham’s Curzon Street Station.

This key site on the Midlands section of the HS2 route is managed by the BBV Joint Venture (Balfour Beatty Group and VINCI Construction). Current work on the 1km sq site entails a large and deep excavation, with 250,000m3 of material being excavated in layers before being transported and deposited locally to form environmental embankments for the main line.

The 2,000 tonne TBM, which has been manufactured in Germany by Herrenknecht, is due for delivery on site in early 2021, will be launched in Summer 2021 and completion of the boring will be mid 2022. The tunnel will be around 9-10m in diameter.

The TBM will take around 5 months to complete the first bore of the twin-bore tunnel. Once the first bore is complete, the TBM will be extracted at the South Portal reception box before being transported by road back to the North Portal to commence the second bore. A large portion of the TBM support modules will be drawn back through the bored tunnel before being positioned on the cradle for the second bore.

On this stretch of the route there are two tunnels being built by BBV – the other one is Bromford Tunnel. There are also 100 bridges, 35 viaducts, 36 cuttings and 70 bridge structures on this part of the route.

Works on a Green Tunnel located south of the South Portal will commence later this year using the D-Wall rigs mobilised for the reception box. Excavation of the reception box will be undertaken in this period with the material being stockpiled locally.

At the peak of construction on the whole of Phase One, ten TBMs will work 24 hours a day, 7 days a week. Weighing up to 2,200 tonnes, each 160m long machine will bore and line the tunnels as they drive forward at speeds of up to 15m per day. 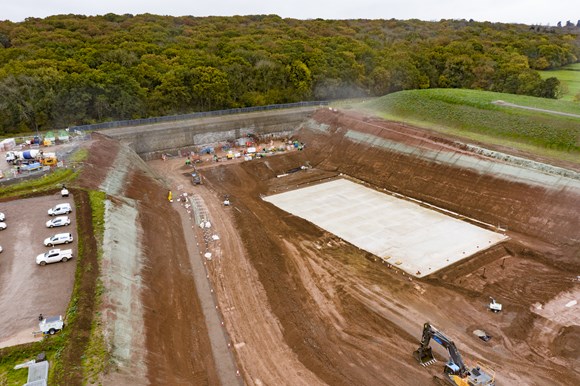