The UK’s HS2 has announced the start of construction at the site of its first innovative ‘green tunnel’, designed to blend the high speed railway into the landscape and reduce disruption for communities.

Unlike a normal underground tunnel, the 2.5km Chipping Warden green tunnel in Northamptonshire is being built on the surface using a pioneering off-site manufacturing approach to speed up construction and improve efficiency. 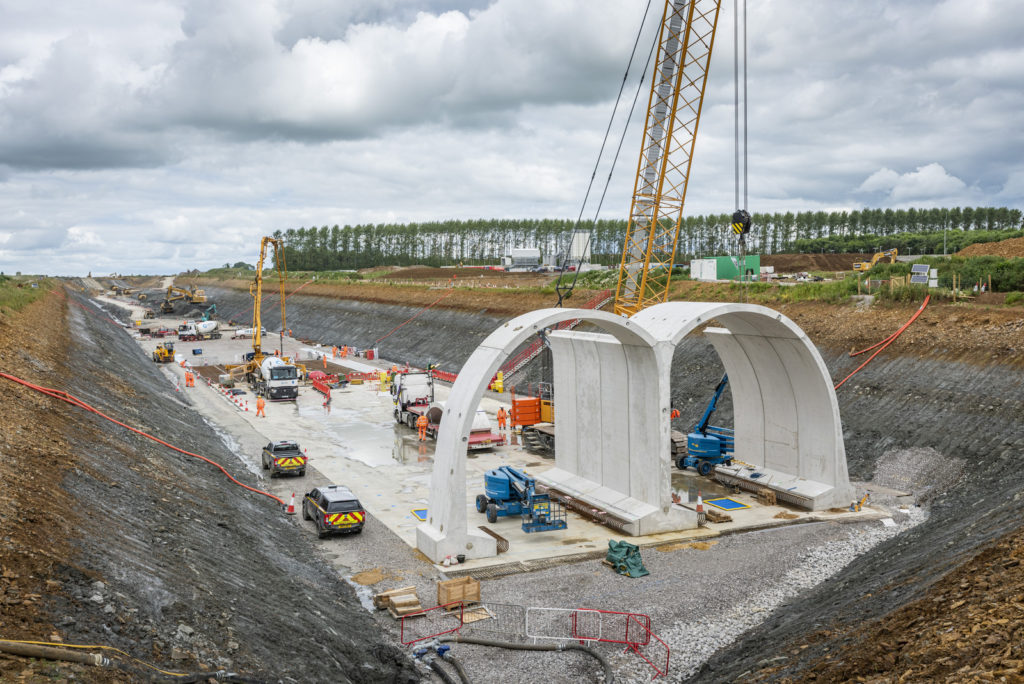 This approach will see more than five thousand concrete tunnel segments made in a factory in Derbyshire before being assembled on site. The completed tunnel will then be covered by earth, with trees, shrubs and hedgerows planted to fit in with the surrounding countryside. Chipping Warden is one of five ‘green tunnels’ that are being built on phase one of the HS2 project.

Applying lessons from the construction of the latest French high speed lines, the off-site approach was developed by HS2’s main works contractor, EKFB – a team made up of Eiffage, Kier, Ferrovial Construction and BAM Nuttall. The tunnel segments are being made by Stanton Precast in Ilkeston Derbyshire as part of a contract which is set to create up to 100 local jobs.

HS2 Ltd’s Project Client Rohan Perin, said, “The Chipping Warden green tunnel is a great example of what we’re doing to reduce disruption for people living close to the railway – and it’s fantastic to see the first arches in position.

“Our trains will be powered by zero carbon electricity but it’s also important to reduce the amount of carbon embedded in construction. The off-site manufacturing techniques being used will help cutting the overall amount of carbon-intensive concrete and steel in the tunnel and make the whole process faster, more efficient and therefore less disruptive for the community.”

Designed as an m-shaped double arch, the tunnel will have separate halves for southbound and northbound trains – each one the height of two double-decker buses. Instead of casting the whole tunnel on site, five different concrete precast segments will be slotted together to achieve the double arch – one central pier, two side walls and two roof slabs. All 5,020 segments will be steel reinforced, with the largest weighing up to 43 tonnes.

Concrete and steel are some of the biggest sources of carbon emissions within the construction industry and by reducing the amount of both materials needed for the tunnel, this lighter-weight modular approach is expected to more than halve the amount of carbon embedded in the structure. It also requires less people and equipment on site, improving safety and reducing disruption for residents.

EKFB’s Project Manager, Jeremie Martin, said, “Seeing the first set of precast units being installed is a milestone that the whole team is very proud of. This three-year construction programme will benefit from off-site manufacturing making the green tunnel build more efficient than the traditional on-site building method.

“The HS2 green tunnels are a first of its kind in the UK. We have designed them as a twin arch ‘M’ shape which is more efficient than the standard box structure, reducing the amount of concrete required, which is a great example of how innovative engineering design can reduce carbon impact.”

The tunnel will be built in sections, with construction expected to be complete in 2024. A relief road has also recently been completed, which will take HS2 vehicles – and other local traffic – away from the centre of the village of Chipping Warden. This will later be extended, to take the A361 over the top of the green tunnel.

Similar green tunnels will also be built at nearby Greatworth as well as Wendover in Buckinghamshire and Burton Green in Warwickshire, stretching for a combined total of more than 6.4km. The tunnels will all have specially designed ‘porous portals’ at either end to reduce the noise of trains entering and exiting the tunnel, along with small portal buildings to house safety and electrical equipment.

Tailored landscaping design plans will be developed for each tunnel, with thousands of native trees and shrubs typical to the local area such as Silver Birch, Oak, Beech and Willow planted to create new woodland areas around the portals and recreate the hedgerows and field boundaries on top of the tunnel.

All 13,290 segments for Chipping Warden, Greatworth and Wendover are being made by Derbyshire-based Stanton Precast Ltd, in a deal that is set to create up to 100 jobs at their Ilkeston factory – an increase in their workforce of around 50%. New production sheds, casting and storage areas are also being built at the factory to accommodate the new work.