Stockholm Region and Implenia have signed a contract for construction of the new ‘Sofia’ metro station and associated tunnels in Stockholm. The order is worth approximately US$120M. 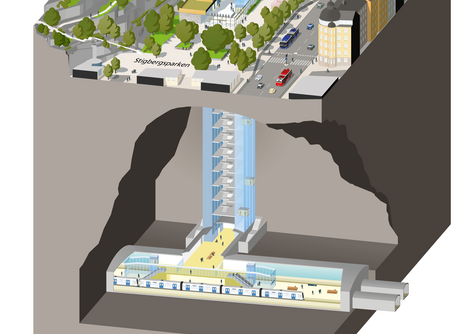 Stockholm’s blue subway line is being extended from the centrally located Kungsträdgården to Nacka in the southeast of the Swedish capital as well as to Hammarby Sjöstad in the south. Implenia has been commissioned by Stockholm Region to build the new underground station ‘Sofia’ including elevator shafts, two single-track tunnels for the subway and a parallel service tunnel. This requires the construction of 4.6km of drill and blast tunnels.

The new ‘Sofia’ metro station, located close to Stigbergsparken, will become an important hub for travellers. Located approximately 100m below ground, it will be one of the deepest underground stations in the world. Eight large high-speed elevators will take commuters to and from the platforms in about 30 seconds.

Implenia’s contract is primarily for the construction work, though Implenia’s Technical Design Office will be responsible for the design of concrete works. Overall design is provided by the client. Construction will take place from Q3/2021 to Q4/2025.

The contract is a continuation of the 1.5 km ‘London Viaduct’ access tunnel that Implenia was commissioned to construct by Stockholm Region in 2019. This tunnelling work is currently underway and heading towards Sofia’s future main tunnels.

“It is an honour to take on another tunnel project of this scale – a complex, multidisciplinary project aligned perfectly with our expertise,” says Per Linden, Country President Sweden. “With preparatory work already underway on the London Viaduct, we can ensure that Sofia is built safely and efficiently.”

“Winning the contract for Sofia marks yet another success for Implenia’s tunnelling business. In future we will only be providing our fully integrated portfolio of services in Switzerland and Germany; but Implenia’s tunnelling expertise will continue to be offered successfully in other markets, including Sweden.”